January 2, 1956, was the day that 29-year-old Jim Elliot had waited for most of his life. He jumped out of bed, dressed as quickly as he could, and got ready for the short flight over the thick Ecuador (Eck-wah-door) jungle. Almost three years of jungle ministry and many hours of planning and praying had led Jim to this day. Within hours, he and four other missionaries would be setting up camp in the territory of a dangerous and uncivilized Indian tribe known then as the Aucas (Ow-cuz), known now as the Waodani (Wah-o-dah-nee). The Aucas had killed all outsiders ever caught in their area. Even though it was dangerous, Jim Elliot had no doubt God wanted him to tell the Aucas about Jesus.

As a little boy growing up in Portland, Oregon, Jim Elliot listened carefully as visiting missionaries told about life on faraway missions fields. He asked them questions and dreamed about being a missionary himself some day. It made him sad that so many people in other countries died without knowing about God.

On February 2, 1952, Jim Elliot waved goodbye to his parents and boarded a ship for the 18-day trip from San Pedro, California to Quito (Kee-toe), Ecuador, South America.

He and his missionary partner, Pete Fleming, first spent a year in Quito learning to speak Spanish. Then they moved to Shandia (Shan-dee-ah), a small Quichua (Kee-chew-wah) Indian village to take the place of the retiring missionary. Jim and Pete studied hard to learn the language and fit in. Their hard work paid off; in six months, both were speaking Spanish well enough to move to Shandia. When they arrived in Shandia, they also had to learn the speech of the Quichuas.

Planning to reach the Aucas

Three years later many Quichuas had become faithful Christians. Jim now began to feel it was time to tell the Aucas about Jesus.

The Aucas had killed many Quichuas. They had also killed several workers at an oil company-drilling site near their territory. The oil company closed the site because everyone was afraid to work there. Jim knew the only way to stop the Aucas from killing was to tell them about Jesus. Jim and the four other Ecuador missionaries began to plan a way to show the Aucas they were friendly.

Nate Saint, a missionary supply pilot, came up with a way to lower a bucket filled with supplies to people on the ground while flying above them. He thought this would be a perfect way to win the trust of the Aucas without putting anyone in danger. They began dropping gifts to the Aucas. They also used an amplifier to speak out friendly Auca phrases. After many months, the Aucas even sent a gift back up in the bucket to the plane. Jim and the other missionaries felt the time had come to meet the Aucas face-to-face.

One day while flying over Auca territory, Nate Saint spotted a beach that looked long enough to land the plane on. He planned to land there and the men would build a tree house to stay safe in until friendly contact could be made.

The missionaries were flown in one-by-one and dropped off on the Auca beach. Nate Saint then flew over the Auca village and called for the Aucas to come to the beach. After four days, an Auca man and two women appeared. It was not easy for them to understand each other since the missionaries only knew a few Auca phrases. They shared a meal with them, and Nate took the man up for a flight in the plane. The missionaries tried to show sincere friendship and asked them to bring others next time.

For the next two days, the missionaries waited for other Aucas to return. Finally, on day six, two Auca women walked out of the jungle. Jim and Pete excitedly jumped in the river and waded over to them. As they got closer, these women did not appear friendly. Jim and Pete almost immediately heard a terrifying cry behind them. As they turned they saw a group of Auca warriors with their spears raised, ready to throw. Jim Elliot reached for the gun in his pocket. He had to decide instantly if he should use it. But he knew he couldn't. Each of the missionaries had promised they would not kill an Auca who did not know Jesus to save himself from being killed. Within seconds, the Auca warriors threw their spears, killing all the missionaries: Ed McCully, Roger Youderian, Nate Saint, Pete Fleming and Jim Elliot.

Late in the afternoon of Sunday, January 8, Elisabeth Elliot, Jim's wife, waited by the two-way radio to hear Nate Saint and his wife discuss how things had gone that day. But there was no call. As evening turned to night, the wives grew worried. They knew the news was not good.

The next morning another missionary pilot flew over the beach to look for the men. He saw only the badly damaged plane on the beach.

News quickly spread around the world about the five missing missionaries. A United States search team went to the beach, found the missionaries' bodies, and buried them.

But don't think Operation Auca ended there because it didn't. In less than two years Elisabeth Elliot, her daughter Valerie, and Rachel Saint (Nate's sister) were able to move to the Auca village. Many Aucas became Christians. They are now a friendly tribe. Missionaries, including Nate Saint's son and his family, still live among the Aucas today.

Elisabeth Elliot even helped make a movie about Operation Auca called Through Gates of Splendor. It showed real life scenes of the five missionaries on the beach with the friendly Aucas. It also included footage of the two years she and her daughter spent living in an Auca village.

During his life, Jim Elliot longed for more people to become missionaries. In his death, however, he probably inspired more people to go to other countries to share the love of Jesus than he ever could have in life. 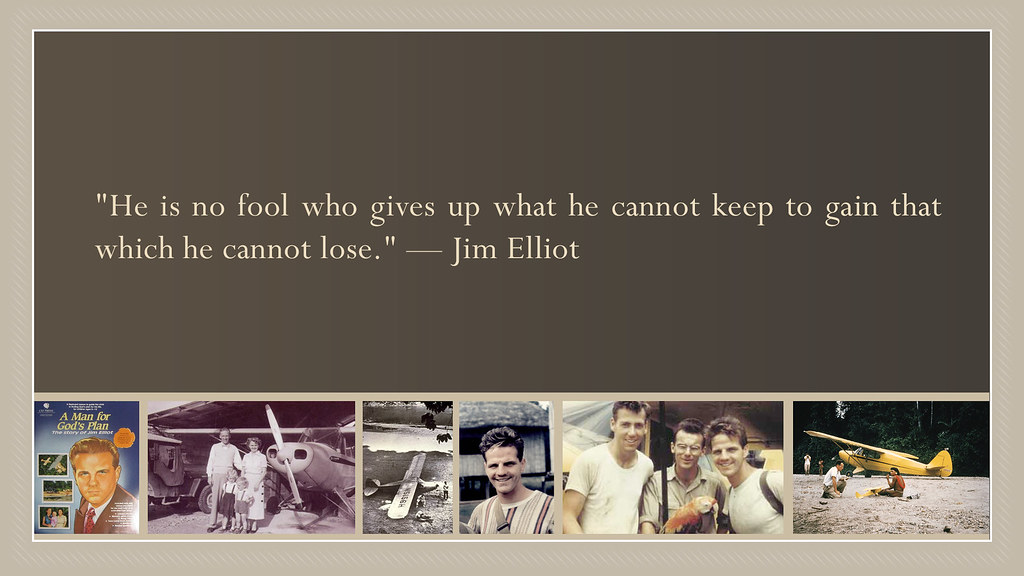 Make It Real! Questions to make you dig a little deeper and think a little harder.
Originally published June 05, 2020.