Even if your job is a dishwasher or stable boy, yours is a divinely appointed vocation, as sacred as that of any pastor or church official.

Even if you attend church twice every Sunday without fail, give most of your income to the poor, read your Bible and pray every day, and live a rigorously moral life, this will not earn you acceptance with God and entrance into heaven. That only comes as a free gift from God, apart from all of your religious dedication.

These were the kinds of things that Martin Luther proclaimed in a time when the church held a frightening control over the lives and consciences of the common people. These teachings changed the world.

Ralph Waldo Emerson, 300 years after Luther, asserted: "Martin Luther the Reformer is one of the most extraordinary persons in history and has left a deeper impression of his presence in the modern world than any other except Columbus."

Luther didn't set out to become a world-class leader. He was headed for a career as a lawyer. Those plans were upset when, as a promising 22-year-old university student, on July 2, 1505, he was caught in a violent thunderstorm. Lightning struck close to him. Thrown to the ground and fearing for his life, he prayed to St. Anne that, if she would save him, he would become a monk. Pictured below: Portrait of Martin Luther 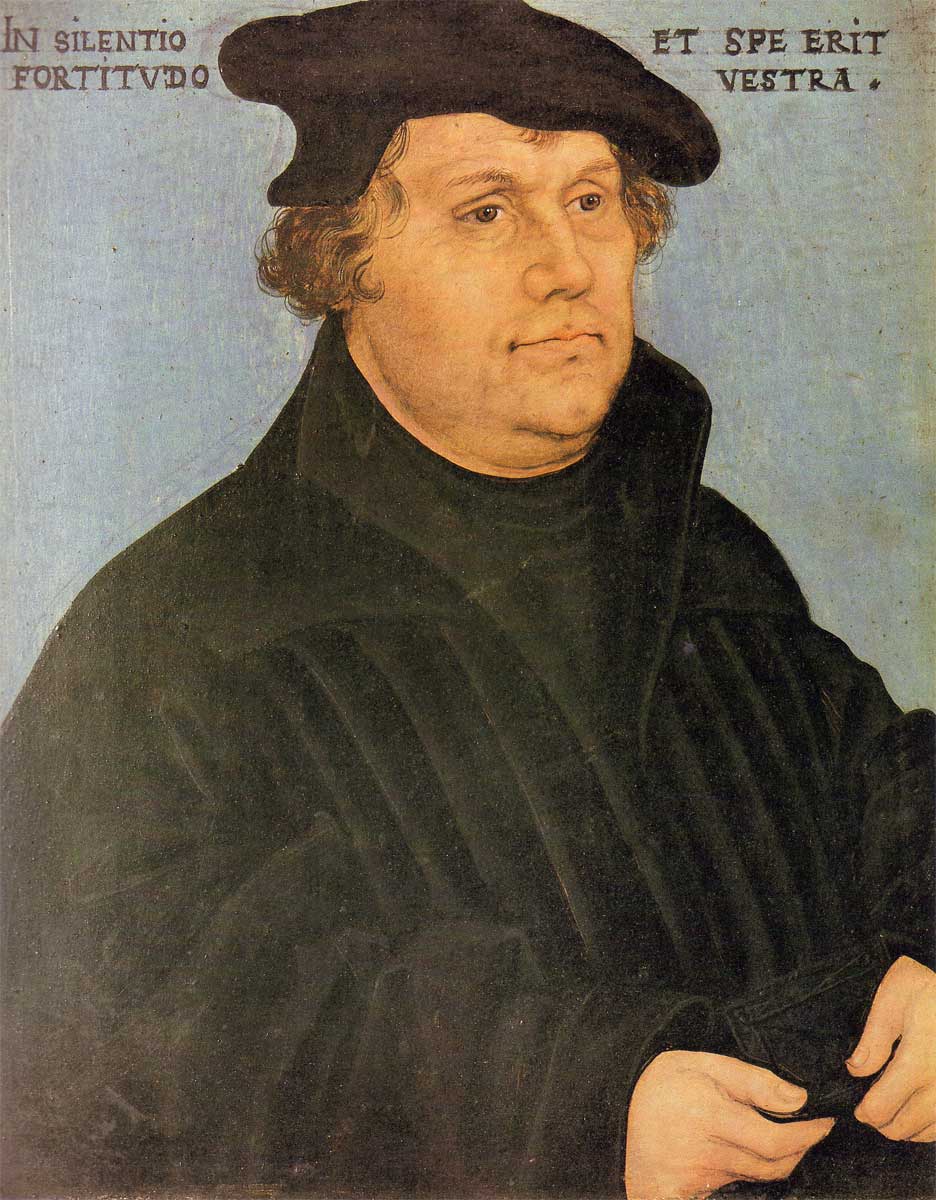 More than a Monk

Luther kept his vow and pursued the monastic life with an intensity that went far beyond the already strict requirements. He wore himself out with prayer and fasting. He wore out his superiors with his excessive and interminable confessions. "I kept the rule of my order so strictly that I may say that if ever a monk got to heaven by his monkery it was I. All my brothers in the monastery who knew me will bear me out. If I had kept on any longer, I should have killed myself with vigils, prayers, readings and other work." But even these superhuman efforts did not bring peace to his tormented soul. When he said his first mass, he was "utterly stupefied and terror-stricken" at the thought of standing before the Almighty God.

The Door to Heaven Opened

His wise confessor and superior, Dr. Johann Staupitz, secured for himself a noble niche in church history in his decision to appoint Luther as a professor of the Bible at Wittenberg. Through his laborious studies of the Scriptures, Luther came to see that the guilt that consumed him could not be lifted by more religion, and the God he dreaded so much was not the God that Christ has revealed. Shooting forth from the book of Romans (1:17), another thunderbolt crossed his path: "Night and day I pondered until I saw the connection between the justice of God and the statement that 'the just shall live by his faith.' Then I grasped that the justice of God is that righteousness by which, through grace and sheer mercy, God justifies us through faith. Thereupon I felt myself to be reborn and to have gone through open doors into paradise. The whole of Scripture took on a new meaning, and whereas before the 'justice of God' had filled me with hate, now it became to me inexpressibly sweet in greater love. This passage of Paul became to me a gate to heaven . . ."

Luther was also a pastor at the city church in Wittenberg and began to preach his newfound faith to his congregation. But at the same time a representative of Pope Leo X, a monk named John Tetzel, was selling indulgences to raise money to finance the building of St. Peter's Cathedral in Rome. Indulgences were letters of pardon which guaranteed forgiveness of sins.

Luther saw this as a perversion of the Gospel. He wrote up 95 theses in Latin and posted them on the door of the castle church inviting scholars to debate the issue of indulgences (see box for examples of his theses). It was no big deal as scholars did that all the time. And it was also no big deal in that no one showed up to debate. But the printing press had recently been invented and Luther's theses were printed up. Within weeks copies were in demand and stimulating debate across Europe.

An epoch-making battle ensued. Within three years a "papal bull" was issued, condemning Luther. He agonized through another level of inner torment in his life. Did he dare stand before the power, wisdom, and doctors of the church and claim his interpretation of Christianity was correct? Before God, he could not do otherwise, unless convinced from Scripture that he was wrong.

Branded a heretic, excommunicated, banished and condemned by the emperor Charles V, he was to be captured or killed on sight. But he was kidnapped and protected by Duke Frederick of Saxony.

He poured out his energy in studying, thinking, writing, and translating the New Testament into a German that everyone could understand. Later he returned to Wittenberg to deal with crises there, while his ideas and writings spread across Europe like water from a burst dam. The Reformation could not be stopped.

Pictured below: Martin Luther at the Diet of Worms where he is deemed a heretic by Charles V.

Luther married a former nun, Kathryn von Bora. Together they had six children and raised four orphans. He concluded that "marriage is a far better school for developing character than any monastery."

A few samples from Luther's 95 theses

45. Christians are to be taught that he who sees a needy man and passes him by, yet gives his money for indulgences, does not buy papal indulgences, but God's wrath.

46. Christians are to be taught that, unless they have more than they need, they must reserve enough for their family need and by no means squander it on indulgences.

86. Again, "Why does not the pope, whose wealth is today greater than the wealth of the richest Crassus, build this one basilica of St. Peter with his own money rather than with the money of poor believers?"

Pictured below: Luther's 95 Theses are posted on the Church doors in Wittenburg.