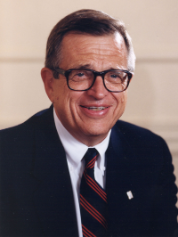 The news that Chuck Colson died today brought to mind a visit to his office eleven years ago.

It happened a few weeks after 9/11 when a team from Calvary Memorial Church in Oak Park, IL spent the night at Prison Fellowship headquarters in Virginia. The next morning we were given a tour of the facilities, including a brief visit to Chuck Colson’s office. Since he was out of town, we were invited to go in and look around. One of us spotted a sign on the wall right above his desk. It was placed at eye-level so Mr. Colson would be sure to see it when he was sitting down. The sign contained just three words:

From somewhere in the back of my mind, I recalled a bit of the story. Early in his Christian life, a friend had given him that sign as a reminder about a Christian’s ultimate priorities. Before his conversion, Mr. Colson gained his fame by serving as Richard Nixon’s “hatchet man.” At one point, he was supposed to have declared that he would run over his own grandmother if it would help re-elect Mr. Nixon. I am sure his grandmother was relieved when Mr. Nixon won by a landslide. The anecdote illustrates something about the competitive nature of modern politics and of modern life in general.

But in God’s economy the values of the world are turned upside down. If you want to save your life, you have to lose it. If you want to become great, first be a servant. If you want true success, first learn to be faithful where you are. Years ago someone gave me a little sign that read, “Bloom where you are planted.” That’s good advice, isn’t it? It’s always easy to daydream about how wonderful life would be if only you lived in another state, or had another husband, or didn’t have so many children, or had another job, or more money, or better health, or a house with a bigger yard, or no yard at all. Living in the “if onlys” eventually breeds unhappiness and can lead to a “root of bitterness” against God and the people closest to you.

When we stand before the Lord, we may be surprised to know that our bottom line and his aren’t quite the same. He won’t ask how much money we made or lost or how many cars we owned or whether or not we climbed to the top of our profession. His question on that day will be much simpler: “Were you faithful in doing the task I gave you to do?” If we can answer yes, our time on earth will have been well-spent. Chuck Colson got it exactly right: It’s faithfulness not success that matters most to God.

His own life proved the truth of those words.

He was faithful, and God gave him success.

Next: On the Road to New England