These are all of the chapters of the book of Zechariah. Clicking on a chapter will show you the text of that chapter of Zechariah in the Bible (New International Version). 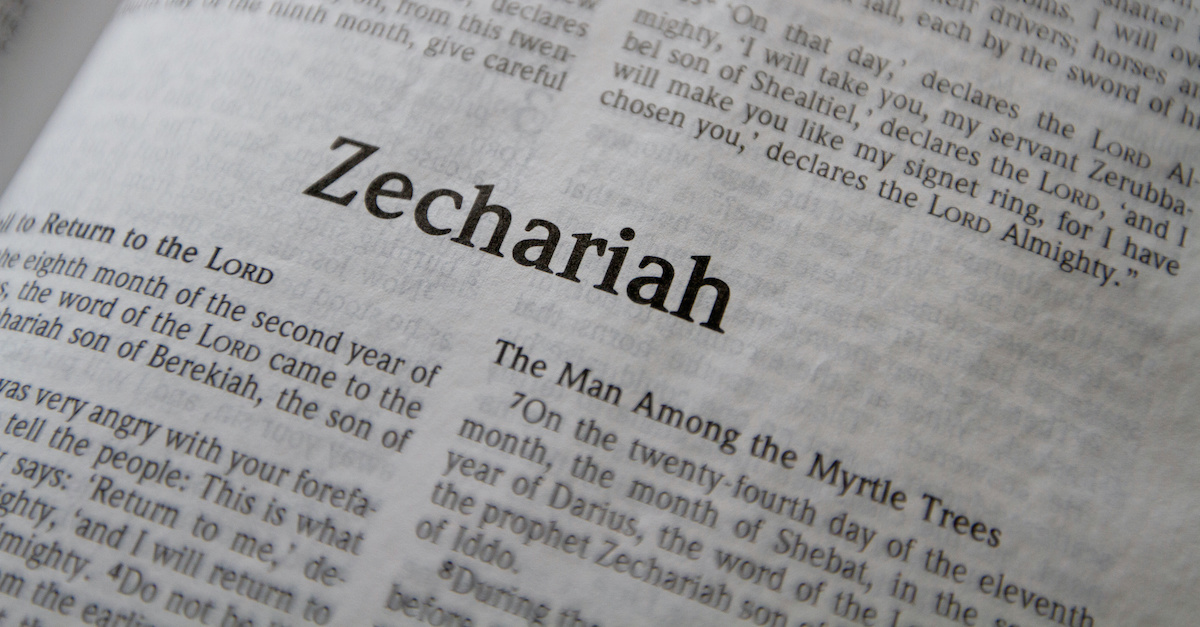 Who Wrote the Book of Zechariah?

The prophet Zechariah, son of Berechiah, son of Iddo wrote the book in Hebrew. Scholars believe he returned from the Babylonian captivity. The style in the first eight chapters differs from the last five, suggesting that Zechariah wrote the later chapters at a much older age, after the completion of the rebuilding of the temple.

Context and Background of Zechariah

Zechariah wrote the book during the rebuilding of the temple in Jerusalem under the leadership of Zerubbabel, the governor Nehemiah, and the high priest Joshua. He was a younger contemporary of the prophet Haggai. The opening lines stating the time as the second year of Darius, the Persian king dates the writing as 520 B.C.

The Israelites had begun rebuilding the temple after 70 years of captivity and exile. Enemy attacks discouraged the people who stopped rebuilding for fourteen years. God sent messages through Zechariah (and Haggai) to encourage the people to complete the temple. The inspiration from the prophets rekindled their passion and they completed the work in four years.

God continued to use Zechariah to prophesy about the future of Jerusalem and the coming messiah. On February 15, 519 B.C. Zechariah experienced eight visions and an angelic spirit helped him understand the meanings of many of the symbols he saw. On December 7, 518 B.C. Zechariah received four messages from God. Matthew 25:35 indicates that Zechariah died as a martyr.

Main Theme and Purpose of Zechariah

The name Zechariah means Yahweh Remembers. The book continually reveals that God remembers His people. God would still judge the people, but he would also cleanse them, bring restoration, and be with them.

God states His reason for reaching out to the people in verse 2:5. He will be the glory of Jerusalem, thus they needed the temple. God’s message to crown the High Priest with two crowns and prophecy of the future branch who would build the temple of the Lord pointed to Christ as both King and High Priest and the builder of a future temple. Zechariah warned the people in chapter 7, to learn from past history.

God deals with people and their actions. In chapters two and three He affirms Zerubbabel and Joshua. Chapters five, nine and ten contain prophecies of judgment for surrounding nations who suppressed Israel. The final chapters prophecy about the future Day of the Lord, salvation of Judah, and the second coming of the Messiah to give people more hope. Chapter fourteen details much of the end times and future of Jerusalem.

The unusual visions, similar in style to Daniel, Ezekiel, and Revelation, use images to illustrate God’s messages. These represent what happens between the heavenly and earthly realms. These include:

-Man with a measuring line represents the restoration of Jerusalem

-Candlestick and with the bowl of oil on top represents daily renewal for the people. The two olive trees represent two anointed ones Haggai and Zechariah, the two lone prophets at this time. It also represents two witnesses in the future, in Revelation.

-Four chariots coming between two bonze mountains symbolized the four spirits of heaven to patrol the earth while the crowns of silver and gold prophesy about the future messiah as priest and king of Israel.

What Can We Learn from Zechariah Today?

God cares about His people, Jerusalem, and keeping His promises. God’s warnings to the people to return to God remains true for all people in all times. God’s passion for Jerusalem should inspire people to note modern events about the city. Encouragement to finish the rebuilding also reminds us that when we start something good, we need to follow it through to completion.

God’s call for repentance and a return to God should remind us that God calls us to live holy lives and seek forgiveness when we disobey God. God is sovereign and remains in control even when it appears that enemies are winning. God will take care of His people. That God desires to restore hearts should always bring us hope.

The fulfillment of the prophecies concerning the Messiah should confirm the truth of Scriptures and how God fulfilled many promises in Jesus. There’s hope for the future, with promises yet to be fulfilled concerning the second coming of Christ and a God who always remembers us. The restoration is for the whole world and all the nations as reflected in the end of chapter eight.

Our Favorite Verses from Zechariah

Zech 8:9, “This is what the LORD Almighty says: ‘Now hear these words, 'Let your hands be strong so that the temple may be built.' This is also what the prophets said who were present when the foundation was laid for the house of the LORD Almighty.’"

Zech 9:9, “Rejoice greatly, Daughter Zion! Shout, Daughter Jerusalem! See, your king comes to you, righteous and victorious, lowly and riding on a donkey, on a colt, the foal of a donkey.” (fulfilled in Matthew 21:4-5, John 15:12)

Zech 12:10, “And I will pour out on the house of David and the inhabitants of Jerusalem a spirit of grace and supplication. They will look on me, the one they have pierced, and they will mourn for him as one mourns for an only child and grieve bitterly for him as one grieves for a firstborn son.” (fulfilled in John 19:37)

Zech 14:9, “The LORD will be king over the whole earth. On that day there will be one LORD, and his name the only name.”

Karen Whiting is a mom, author, international speaker, writing coach, and former television host who loves sharing ideas to strengthen families. She has written Growing a Mother’s Heart: Devotions of Faith, Hope, and Love from Mothers Past, Present, and Future. Check out her new book 52 Weekly Devotions for Family Prayer that includes a different way to pray each week plus stories and activities to explore questions children ask about prayer She loves adventure including camel riding, scuba diving, treetop courses, and white water rafting plus time at home crafting and baking.