These are all of the chapters of the book of Acts. Clicking on a chapter will show you the text of that chapter of Acts in the Bible (New International Version). 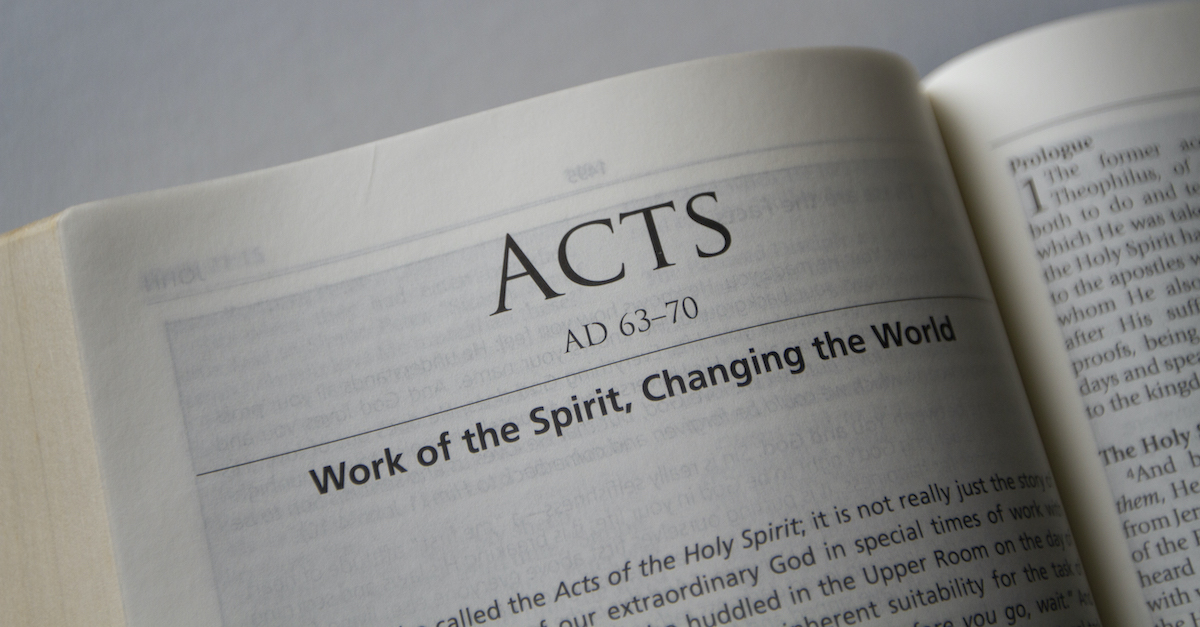 Who Wrote the Book of Acts?

The author of Acts is believed to be Luke, physician, and author of the gospel of Luke. While the author never offers his name, he does identify himself as a companion of Paul in Philippi (Acts 16), Macedonia and Greece (Acts 20:1-5), and Rome after Paul’s arrest (Acts 27-28). Luke is the most likely candidate for a few reasons:

1) Of Paul’s frequent companions, several are identified separately from the author (Acts 20:4-5), and others, we know from Paul’s own writings, did not go with him to Rome.

2) Acts begins by directly addressing a man called Theophilus (Acts 1:1), as does the gospel of Luke (Luke 1:3-4). Acts 1:1 also references a previous book written “about all that Jesus began to do and to teach until the day he was taken up to heaven, after giving instructions through the Holy Spirit to the apostles he had chosen”—a description that matches Luke’s gospel.

3) The medical terminology used in Acts indicates knowledge that Luke would have had as a doctor (Colossians 4:14).

4) The style similarities between Acts and Luke indicate at least a possibility that they share an author. And Luke’s style is profoundly recognizable, described by Robert H. Gundry as “some of the most cultured Greek writing in the New Testament.”

4) Lastly, several historical sources point to Luke as the author of Acts, including the Muratorian Canon (AD 170) and the writings of Eusebius (AD 325).

Context and Background of Acts

The book of Acts is addressed to Theophilus. Luke’s gospel uses the title “most excellent Theophilus” (Luke 1:3) indicating that he may have been a Roman with rank. A note in the Zondervan Amplified Study Bible speculates that, as a Gentile participating in a faith with Jewish origins, Theophilus may have wondered if he was meant to be part of it at all (AMP Luke 1:4 Study Note)—doubt that Luke’s account of Peter’s vision (Acts 10:9-23) might have settled.

“What God has cleansed no longer consider unholy” (Acts 10:15)—God’s command to Peter was the beginning of Jews and Gentiles struggling to overcome years of separation. The tension and confusion depicted in Acts surrounding this issue has led some Bible scholars to favor an earlier date (AD 60s) for its writing. If this date is accurate, Luke probably wrote his account from Rome since he accompanied Paul there after his arrest.

Others suggest AD 70 or even later. But post-AD 70 authorship raises an important question: why did Luke not mention the result of Paul’s trial, Peter’s death, or any of the events following that would surely be considered important to the history of the church? A date preceding these events is more likely unless Luke left out certain details to focus on his true purpose for writing the book.

Main theme and Purpose of Acts

As a sequel to the gospel of Luke, Acts picks up after Christ’s ascension and carries us through the developmental years of Christianity. Luke’s gospel was written so that Theophilus would “know the exact truth about the things you have been taught” (Luke 1:4). And the purpose of Acts logically follows: because all these things are true, “you will receive power when the Holy Spirit has come upon you; and you shall be My witnesses both in Jerusalem, and in all Judea and Samaria, and even to the remotest part of the earth" (Acts 1:8). There is some conjecture that Acts may have been intended as a powerful, convicting defense for Paul’s trial. But we can’t know for sure.

What we do know is that Acts chronicles the spread of the gospel, carried by the apostles across geographical and societal boundaries to both Jews and Gentiles. It presents Christianity’s victory in continuing to flourish despite fierce opposition. And it connects Christ’s initial ministry with the continuation of it through the power of the Holy Spirit in the lives of His apostles.

What Can We Learn from Acts Today?

Acts is a sure witness to the reality of Christ’s power in believers. We see His promise to send the Holy Spirit fulfilled (Acts 2), enemies transformed into allies (Acts 9), prison doors opened (Acts 16:22-26), and miracles performed (Acts 9:36-43). Acts also expresses God’s insistence that Gentiles no longer be shunned. Their open acceptance into the faith makes it clear that there is nothing (outside of our own unbelief) that can separate us from Christ. In the words of Peter, “I most certainly understand now that God is not one to show partiality, but in every nation the man who fears Him and does what is right is welcome to Him” (Acts 10:34-35). And what should the result of this assurance and acceptance be?

Our Favorite Verses from Acts

“God has raised this Jesus to life, and we are all witnesses of it. Exalted to the right hand of God, he has received from the Father the promised Holy Spirit and has poured out what you now see and hear.” (Acts 2:32-33)

“Repent, then, and turn to God, so that your sins may be wiped out, that times of refreshing may come from the Lord, and that he may send the Messiah, who has been appointed for you—even Jesus…”(Acts 3:19-21)

“Jesus is ‘the stone you builders rejected, which has become the cornerstone.’ Salvation is found in no one else, for there is no other name under heaven given to mankind by which we must be saved.” (Acts 4:11-12)

“Therefore, my friends, I want you to know that through Jesus the forgiveness of sins is proclaimed to you. Through him everyone who believes is set free from every sin...” (Acts 13:38-39)

“The God who made the world and everything in it is the Lord of heaven and earth and does not live in temples built by human hands. And he is not served by human hands, as if he needed anything. Rather, he himself gives everyone life and breath and everything else. From one man he made all the nations, that they should inhabit the whole earth; and he marked out their appointed times in history and the boundaries of their lands. God did this so that they would seek him and perhaps reach out for him and find him, though he is not far from any one of us. ‘For in him we live and move and have our being.’” (Acts 17:24-28)

“Therefore, keep up your courage, men, for I believe God that it will turn out exactly as I have been told.” (Acts 27:25)