Advent is a seasonal tradition often celebrated in the Christian and Catholic faith to prepare for the arrival or coming of Jesus Christ. The advent wreath is used to symbolically commemorate newness, eternal life, and the death and resurrection of the promised Messiah. It is often coupled with the lighting of candles and prayers recited in the weeks leading up to Christmas.
Joel Ryan Crosswalk.com Contributing Writer

The History of Advent

Advent traditions will vary by country, but the heart behind Advent is mostly the same across cultures and denominations. Derived from the Latin word “adventus”, the word advent means “arrival” or “coming”. In this instance, it is used to indicate set time(s) during the month of December to commemorate the coming of the Messiah in Jesus Christ. Advent, like Christmas, is a season of expectation, celebration, and hope, connected to the birth of the prophesied Messiah and the promise of Christ’s subsequent ministry.

There are a few historical accounts that put the inception of Advent as a church tradition somewhere around the 4th or 5th century. Other traditions use Advent as a way to anticipate the second coming of Jesus Christ, which has yet to transpire. However, most of what we know and practice today, can be traced back to the Middle Ages and later 19th century. In 1851, the first mention of an Advent calendar was seen in Elise Averdieck’s picture book, and in 1839, the advent wreath first appeared.

Advent wreaths were eventually fashioned out of evergreens, twisted together in a circle to symbolize continuous life across the seasons, from the death of winter to the new life of spring. Naturally, this earthly symbolism also points to the spiritual symbolism of newness and the promise of eternal life and salvation offered through the sacrifice of Jesus Christ (John 3:16). The circular nature of the wreath, similar to a wedding ring or band, is further meant to reflect the unending love of Christ and eternal life offered through salvation.

Holly leaves, berries, and seeds are sometimes added to the Advent wreath as well. Holly leaves can be prickly and therefore used to represent the crown of thorns placed on Jesus’s head during his crucifixion. Berries, which are typically red, also point to Christ’s sacrifice and the blood shed for sins. Pinecones, seeds, and nuts are also placed within the wreath as a symbol and promise of new life. Together, the elements of the Advent wreath reflect the new life and eternal salvation offered through the death and resurrection of Jesus Christ, who we now celebrate. 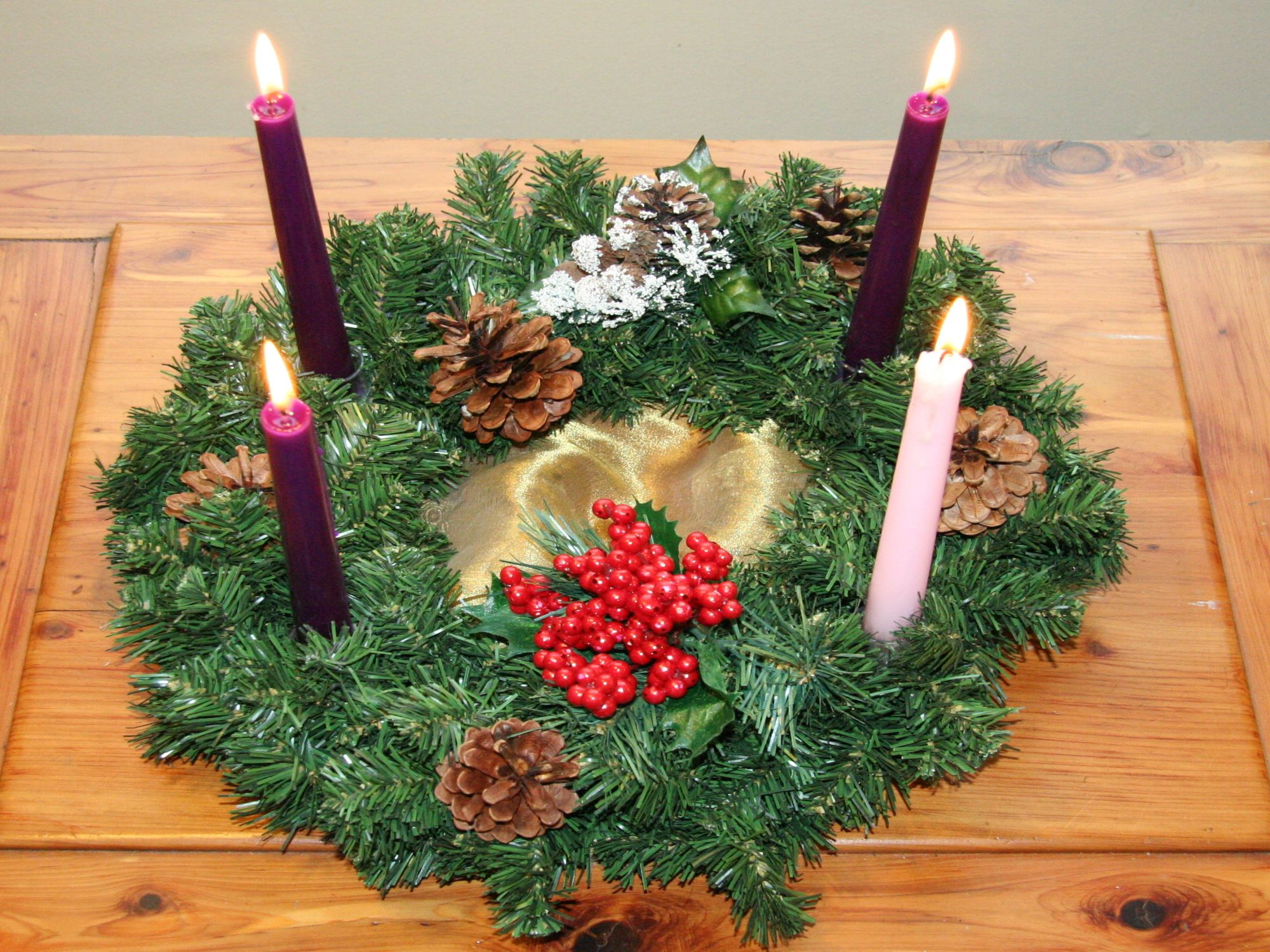 In almost all Advent traditions, the lighting of candles is also a prominent feature of each week’s commemorative celebration. Some candles are placed within or near the wreath itself. Other times, they are lit separately on each Sunday beginning four weeks prior to Christmas. Candles and the light they produce are a reflection of the light that came into the world with the arrival of Jesus Christ.

Some traditions light a single candle on each of the 24 days leading up to Christmas. Other traditions place one large candle in the center of the wreath and light it every day of December until Christmas.

The most common tradition, however, typically uses four candles. Each candle is lit on one of the four Sundays leading up to Christmas. The color of these candles can vary, but it is common that the first, second, and fourth candle is purple, while the third candle is rose-colored, red, or a pinkish hue. In some cases, all the candles are red, blue, or white, and often, a fifth white candle is placed in the middle of the wreath and lit on Christmas Day itself. Catholic tradition even states that the four candles, representing the four weeks of Advent, each stand for 1,000 years to total the 4,000 years from the time of Adam to the birth of the Messiah.

In most traditions, the lighting of the four candles (or multiple candles) is meant to be done as a family and will often be used to reflect on the hope, faith, joy, peace, light, and purity that came into the world with the gift of the Messiah. Families will typically light the candle together, often encouraging children to take part in the celebration. Many modern churches light an Advent candle during Sunday services to prepare for Christmas as a church family.

Regardless of specific Advent traditions and differences in how it is celebrated across cultures and countries, Advent is a time for all believers and families to commemorate the arrival of the Messiah, prepare for his second coming, and celebrate the joy of Christmas together.

Joel Ryan is an LA-based children’s and young adult author who teaches writing and communications at Life Pacific University. As a former youth pastor, he has a heart for children and young adults and is passionate about engaging youth through writing and storytelling. His blog, Perspectives Off the Page, discusses the creative and spiritual life through story and art.