Christianity/ Wiki / Cults and Other Religions / Who Are Pagans? The History and Beliefs of Paganism

Who Are Pagans? The History and Beliefs of Paganism

Pagans are generally described as those holding religious beliefs other than those of the main world religions. Learn the origin, history, and traditions of paganism as we explore what pagans believe and practice today.
Christianity.com Editorial Staff

So who are pagans? Learn about the origin, history, and traditions of paganism as we explore what pagans believe and practice today.

According to Merriam-Webster, the term “Pagan” comes from the Late Latin word paganus, which was used at the end of the Roman Empire to identify those who practiced a religion other than Christianity, Judaism, or Islam. Early Christians often used the term to refer to non-Christians who worshiped multiple deities. In Latin, paganus originally meant “country dweller” or “civilian;” it is believed that the word’s religious meaning developed either from the enduring non-Christian religious practices of those who lived far from the Roman cities where Christianity was more quickly adopted, or from the fact that early Christians referred to themselves as “soldiers of Christ,” making nonbelievers “civilians.”

Origin and History of Paganism

According to patheos.com, Paganism represents a wide variety of traditions that emphasize reverence for nature and a revival of ancient polytheistic and animistic religious practices. Some modern forms of Paganism have their roots in 19th century C.E. European nationalism (including the British Order of Druids), but most contemporary Pagan groups trace their immediate organizational roots to the 1960s and have an emphasis on archetypal psychology and a spiritual interest in nature.

Paganism is simultaneously a prehistoric and postmodern religion-it is as ancient as the fertility symbols associated with the veneration of gods and goddesses tens of thousands of years ago, while its newest forms have emerged as recently as the mid-20th century. Broadly speaking, Paganism encompasses two key characteristics: 1) religious and spiritual practices concerning the worship of, or devotion to, the earth, the natural world, and/or the manifest physical universe; and/or 2) belief in spiritual beings: goddesses, gods, nature spirits (fairies, elves, power animals), and ancestral spirits.

Polytheism: One principle of the Pagan movement is polytheism, the belief in and veneration of multiple gods or goddesses. Within the Pagan movement, there can be found many deities, both male and female, who have various associations and embody forces of nature, aspects of culture, and facets of human psychology. These deities are typically depicted in human form and are viewed as having human faults. They are therefore not seen as perfect, but rather are venerated as being wise and powerful. Pagans feel that this understanding of the gods reflected the dynamics of life on Earth, allowing for the expression of humor.

Animism: A key part of most Pagan worldviews is the holistic concept of a universe that is interconnected. This is connected with a belief in either pantheism or panentheism. In both beliefs, divinity and the material or spiritual universe are one. For pagans, pantheism means that "divinity is inseparable from nature and that deity is immanent in nature".

Click here to learn more about Animism: definition and examples. 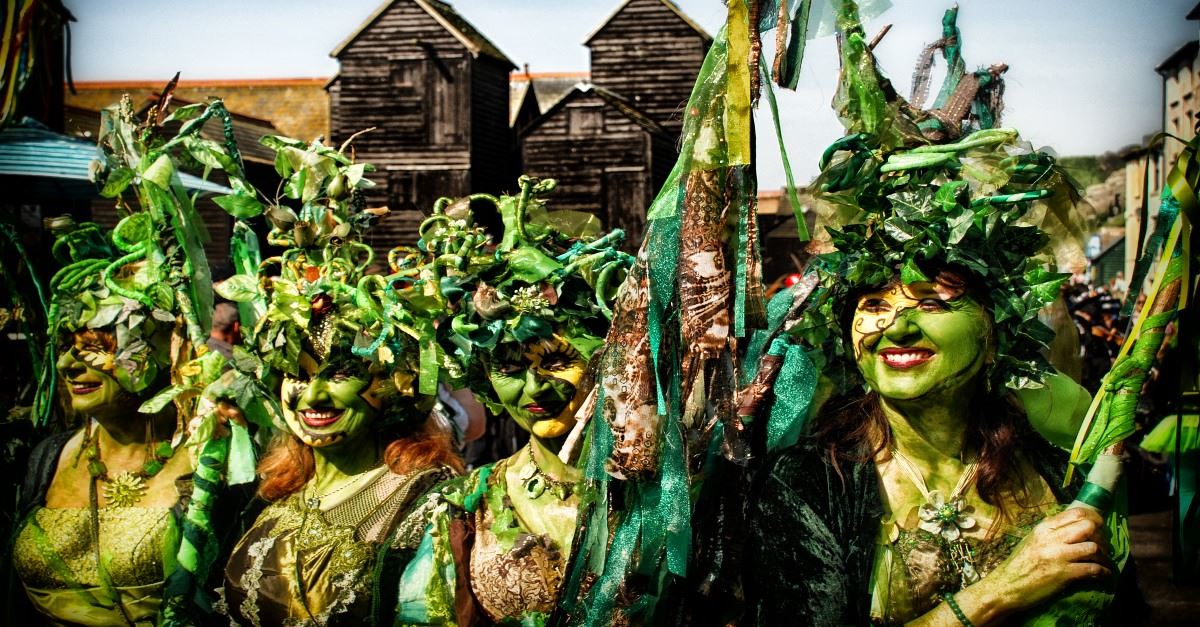 As also described on Wikipedia.com, Pagan ritual can take place in both a public and private setting. Contemporary Pagan ritual is typically geared towards "facilitating altered states of awareness or shifting mindsets." In order to induce such altered states of consciousness, pagans utilize such elements as drumming, visualization, chanting, singing, dancing, and meditation. American folklorist Sabina Magliocco came to the conclusion, based upon her ethnographic fieldwork in California that certain Pagan beliefs "arise from what they experience during religious ecstasy."

Paganism's public rituals are generally calendrical, although the pre-Christian festivals that Pagans use as a basis varied across Europe. Nevertheless, common to almost all Pagan religions is an emphasis on an agricultural cycle and respect for the dead. Common Pagan festivals include those marking the summer solstice and winter solstice as well as the start of spring and the harvest.

The Pagan Woman in Matthew 15

Faith is often found in unlikely places. The Bible tells the story of a pagan woman whom Jesus commended for her great faith (Matthew 15). She was not raised as a Jew, knowing the Scriptures. She certainly did not have the privilege of walking and talking with Jesus as the disciples had. This woman had been raised in a godless home, in a home filled with idols. But with what little she knew about Jesus, she applied dramatic faith. We could even describe it as amazing faith.

One would have thought that the strongest faith would have come from one of Jesus’ disciples like Peter, James, or John. But it came from this pagan woman. The only other time Jesus called out someone’s faith as an example was when a Roman centurion—another Gentile—asked Him to heal his servant.

Excerpt from "The Faith of a Pagan?" by Greg Laurie

Deuteronomy 18:9-12 - “When you come into the land that the Lord your God is giving you, you shall not learn to follow the abominable practices of those nations. There shall not be found among you anyone who burns his son or his daughter as an offering, anyone who practices divination or tells fortunes or interprets omens, or a sorcerer or a charmer or a medium or a necromancer or one who inquires of the dead, for whoever does these things is an abomination to the Lord. And because of these abominations the Lord your God is driving them out before you."

Exodus 20:1-26 - "And God spoke all these words, saying, “I am the Lord your God, who brought you out of the land of Egypt, out of the house of slavery. 'You shall have no other gods before me. You shall not make for yourself a carved image or any likeness of anything that is in heaven above, or that is in the earth beneath, or that is in the water under the earth. You shall not bow down to them or serve them, for I the Lord your God am a jealous God, visiting the iniquity of the fathers on the children to the third and the fourth generation of those who hate me,'"

1 Corinthians 6:9-11 - "Or do you not know that the unrighteous will not inherit the kingdom of God? Do not be deceived: neither the sexually immoral, nor idolaters, nor adulterers, nor men who practice homosexuality, nor thieves, nor the greedy, nor drunkards, nor revilers, nor swindlers will inherit the kingdom of God. And such were some of you. But you were washed, you were sanctified, you were justified in the name of the Lord Jesus Christ and by the Spirit of our God."

Acts 8:9-13 - "But there was a man named Simon, who had previously practiced magic in the city and amazed the people of Samaria, saying that he himself was somebody great. They all paid attention to him, from the least to the greatest, saying, 'This man is the power of God that is called Great.' And they paid attention to him because for a long time he had amazed them with his magic. But when they believed Philip as he preached good news about the kingdom of God and the name of Jesus Christ, they were baptized, both men and women. Even Simon himself believed, and after being baptized he continued with Philip. And seeing signs and great miracles performed, he was amazed."

Leviticus 26:1-46 - “You shall not make idols for yourselves or erect an image or pillar, and you shall not set up a figured stone in your land to bow down to it, for I am the Lord your God. You shall keep my Sabbaths and reverence my sanctuary: I am the Lord. 'If you walk in my statutes and observe my commandments and do them, then I will give you your rains in their season, and the land shall yield its increase, and the trees of the field shall yield their fruit. Your threshing shall last to the time of the grape harvest, and the grape harvest shall last to the time for sowing. And you shall eat your bread to the full and dwell in your land securely.'"

Ezekiel 13:18 - "And say, Thus says the Lord God: 'Woe to the women who sew magic bands upon all wrists, and make veils for the heads of persons of every stature, in the hunt for souls! Will you hunt down souls belonging to my people and keep your own souls alive?'"

2 Thessalonians 2:9 - The coming of the lawless one is by the activity of Satan with all power and false signs and wonders,

Jeremiah 10:1-5 - "Hear the word that the Lord speaks to you, O house of Israel. Thus says the Lord: 'Learn not the way of the nations, nor be dismayed at the signs of the heavens because the nations are dismayed at them, for the customs of the peoples are vanity. A tree from the forest is cut down and worked with an axe by the hands of a craftsman. They decorate it with silver and gold; they fasten it with hammer and nails so that it cannot move. Their idols are like scarecrows in a cucumber field, and they cannot speak; they have to be carried, for they cannot walk. Do not be afraid of them, for they cannot do evil, neither is it in them to do good.'”

Related Cults and Other Religions