Don’t Let the Familiar Steal Your Christmas
By Rick Warren

“Their minds are full of darkness; they wander far from the life God gives because they have closed their minds and hardened their hearts against him” (Ephesians 4:18 NLT, second edition).

You’ve likely celebrated Christmas most of your life. More than likely, you’ve heard the Christmas story before too. You know all about Mary, Joseph, and baby Jesus. You’ve heard about the shepherds and the wise men. You’ve sung songs about them. You’ve watched them in Christmas plays.

It may not inspire or amaze you anymore.

You’re not alone though. During the very first Christmas, there was a group of people who missed the birth of Jesus because of familiarity — the religious leaders in Jerusalem.

You’ll notice in the Christmas story that when the Son of God was born, not a single religious person was invited. The people who should have known the most about the birth of Jesus, the spiritual and religious leaders of Israel, didn’t have a clue.

Wise men who had studied the Hebrew Scriptures came from the East (not Israel) because they had seen the star. They knew the Savior of the world had been born. They just didn’t know where he would be born.

When they asked King Herod of Israel, he didn’thave any idea. He asked his religious scholars. They knew exactly what he was talking about. They’d been waiting for this for hundreds of years. They had discussed it, debated it, detailed it, and dissected it.

The Bible says King Herod “called a meeting of the leading priests and teachers of religious law and asked, ‘Where is the Messiah supposed to be born?’ ‘In Bethlehem in Judea,’ they said, ‘for this is what the prophet wrote’” (Matthew 2:4-5 NLT, second edition).

The three wise men — foreign dignitaries — came a long distance, maybe as far away as China, to witness the birth of Jesus. The king was so concerned that he called a special meeting. Yet his religious advisers, who were already in Israel, didn’t want to even check out the claim. Israel’s religious leaders had waited for centuries for Jesus to come. Over time, they started paying more attention to traditions than waiting for the Messiah.

That sounds familiar, doesn’t it? We have so many Christian traditions. They just keep adding up: Santa Claus, Rudolph, Frosty, and Elf on the Shelf. We have new tradition after new tradition, but no one is talking about the real reason for the season.

None of those traditions will make a real, lasting difference in your life. But a relationship with God will.

The religious leaders of Jesus’ day knew every religious tradition by heart, but they wouldn’t walk five miles from Jerusalem to Bethlehem to witness the birth of God’s Son. People today will put up lights, have parties, give gifts, and send out cards. They’ll participate in every single Christmas tradition they can squeeze into December.

Don’t be like the religious leaders who were more concerned with tradition. Follow the example of the wise men, and seek God this Christmas. It’s the reason we celebrate Christmas — God wants to connect with you! 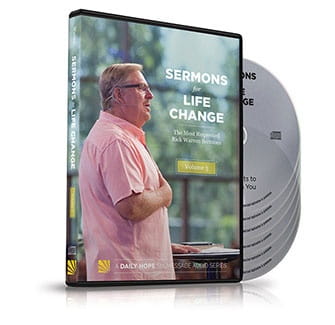 Do you want to experience a joy filled Christian life?  If you do, then it’s essential to anchor your life in the wisdom of God’s Word. That’s why we’ve assembled a very special 6 CD collection of Pastor Rick’s most requested teachings. Many people have shared that these messages have inspired them spiritually and also helped them in very practical ways. You’ll want to listen to these teachings again and again and share them with your family members and friends.