The crack of the starter gun echoed through the stadium on the hot Friday evening in July of 1924. Eric Liddell sprinted forward in his unusual running style, his head thrown back, his arms waving at his side, his feet barely touching the track as he ran. No one, not even Eric himself, though he had a chance of winning the 400-meter race. But Eric was determined to do his best. Eric Liddell was Scotland's fastest sprinter. He was their hero. He had won every 100-meter race he had run since early in his running career. His quick speed earned him a spot on the 100-meter British Olympic team.

However, Eric Liddell had announced to his country that he could not run in the Olympic 100-meter race because the finals were scheduled on a Sunday. Sunday was a day of worship and rest for Eric. He would not run even if he were his country's only hope of winning an Olympic gold medal. This made the Scottish people very upset with Eric. They wrote bad things about him in the newspaper. Some people even called him a traitor. But Eric stood firm. He had never run on Sunday and never would, not even for an Olympic gold medal.

With very little time remaining before the Olympics began, Eric trained and qualified for another race that was not scheduled on a Sunday. Eric knew his chance of winning the 400-meter race was slim because two of the runners in this race had set world record times. In addition, on the day of the race, Eric was assigned the worst lane. But a note in his pocket encouraged him. The team trainer had given it to him before he left his hotel room. It read, "He who honors Him, He (God) will honor." Liddell knew his decision not to run on Sunday honored God.

Going for the Gold

As Eric rounded the turn on the track where all the runners usually come together, he expected to see the world record holders ahead of him. But he was there alone. He threw his head back even more than usual and pumped his legs as fast as he could. Eric crossed the finish line first, winning the gold medal! He had also set a new world record! Eric received a hero's welcome when he returned home. The newspapers now tried to outdo each other praising him. But Lidell knew their praise would not last long. He would soon announce his plan to stop running and go to China to tell people about Jesus.  Pictured below: Liddell's 400 Meter Gold finish 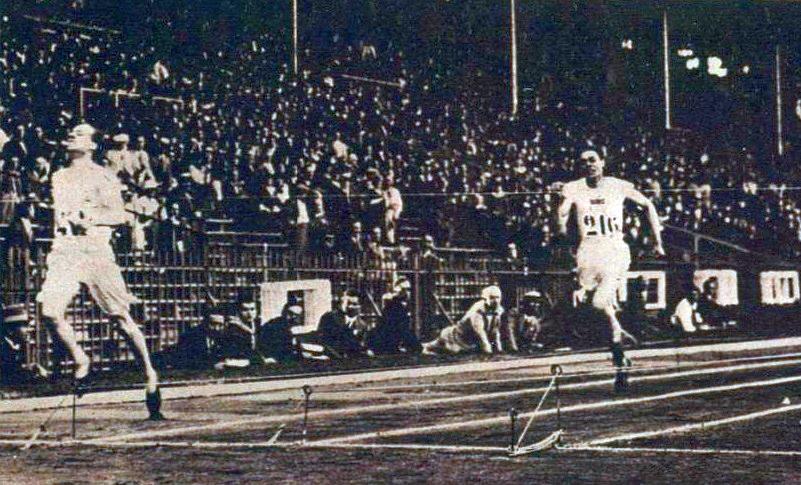 Eric Liddell was born in China. His parents were missionaries there. He spent his early childhood playing among the Chinese children. He spoke their language perfectly. He knew God was calling him to return to China to help teach the Chinese people about Jesus. It was a dangerous time to return, however. Japanese soldiers had invaded China and were treating the Chinese people badly. They killed many of them, burned their villages, and destroyed their crops. When Eric arrived in China, it was even worse than he expected. It was not the land he had left many years before. The Chinese, whom he once played with, now did not want foreigners in their country.

Despite the difficulties Liddell stayed. He was sure God had called him to China. He began teaching at a British-run Chinese college. He loved teaching the boys and challenging them in sports. Life would not remain so simple for him though. The conditions in China were growing worse by the day. The mission's board chairman asked Eric to move to the area in which he had grown up. The people there needed comfort and hope in the midst of the Japanese devastation. Many Chinese people in this area also hated Christians. Missionaries were likely to be shot without question. Eric discussed it with his wife and though it was hard to leave, he knew he was the best person to go.

Eric Liddell worked long hours traveling in the war-torn area preaching and tending the sick. Many times, he had to carry the injured to the hospital on his bike over rough roads while dodging gunfire. Sometimes it would take an entire day to get to the village hospital. In the meantime, the Japanese were taking over more of the country and there was talk that all foreigners would be locked up.

Captured, but not Stopped

The day quickly arrived when all foreigners were forced to move into an overcrowded prison camp. They lived in very bad conditions. There was no running water, the bathrooms did not work, and they were given only a small bowl of soup and bread at each meal. Eric made the best of it though. He knew they could be there for a very long time. He set up church services, schooling for the children, sporting activities, and helped take care of the sick. He became the most respected person in the camp because of his good attitude.

However, after being in the camp for almost two years, Liddell became very sick. He had a stroke and was unable to walk. The man, who had helped so many, now could not help himself. One morning Eric, the super athlete, who was now only 43, began to have trouble breathing. A little girl, who had come to visit, ran to get help. When she returned with a friend of Eric's, he looked up at his friend and said, "It is surrender." Eric died that same day. It was later determined that he had a large brain tumor. The entire camp mourned his death. When news reached Scotland a few months later, the entire country also mourned the death of their beloved athlete who died at such a young age.

Eric Liddell would not have ever imagined it, but his devotion to God and commitment to spreading the story of Jesus did not end in that brutal prison camp. His life and testimony are remembered around the world. His story has touched the hearts of millions through a movie about him that won the Academy Award. It is called Chariots of Fire.  Watch Liddell win the Gold in the movie clip below!

To learn more about Eric Liddell, read his biography here.

How Well Did You Read the Story?