Two Days With the Pastors in Dalian 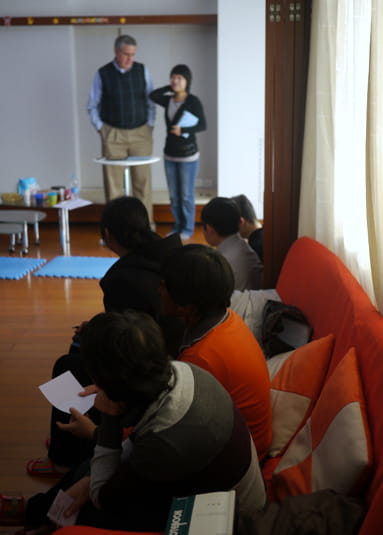 Last week my son Mark and I spent two days speaking at a pastor’s conference in Dalian, China. To put the matter that way probably makes people think of hundreds of pastors gathered in a large church sanctuary, with bright lights, a worship team, and high-powered services.

But we were in China where pastors must meet discreetly. Even though the church here is growing explosively, large gatherings are frowned upon by the government. Especially large gatherings of the house church movement (sometimes called the “underground” church to distinguish it from the registered or Three-Self church).

So we met in an apartment in Dalian, the “we” being about 20 people. Some pastors were local. Others came a long distance. One man came from Urumqi in far-western China. Another man came who started a movement that now includes 100,000 believers.

On Tuesday they came to the apartment at 6:30 AM for the EMS: Early Morning Service. After worship and prayer, I spoke for a few minutes from Luke 12:16-21. They prayed some more. Then breakfast—Long strips of fresh Chinese bread along with sweet soy milk, hard-boiled eggs, and sliced cucumbers. Pretty healthy, I think.

Then Peter came up to Mark and me and asked, “Who is going to preach first?” I said, “I’ll go first.” That was the first news Mark had that he was speaking this morning.

We started with 30 minutes of worship at 9 AM, then prayer, then I spoke for an hour on “Don’t You See Yet?” from Mark 8:22-26. The day before I gave the longest sermon of my life–an hour and a half on “How God Grows Leaders Through Unjust Criticism” so the next day's message was short by comparison. Then a break, more music, and Mark spoke on Jeremiah 20. We ate lunch in the apartment. Most folks had Chinese food. The first day Peter brought me a Big Mac. Then next day it was KFC. In the afternoon more worship and prayer, the pastors shared some more of their stories. Peter said we would decide later what to do that night. Maybe speak at a local church. Maybe meet with a pastor and his wife.

We’ve ended up spending two full days with the pastors in very close quarters. I enjoyed it because we really got to know each other. And we discovered that though we are separated by language and to some extent by culture, the things that unite us in Christ are far greater than the things that divide us.

Next: Student Night in Dalian