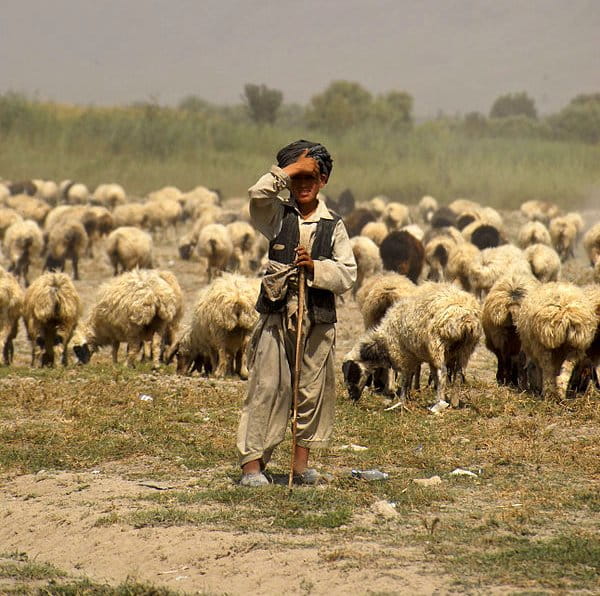 “They hurried off and found both Mary and Joseph, and the baby who was lying in the feeding trough” (Luke 2:16).

Not much is known about the origin of this song, except that it is called a “Christmas Plantation Song,” which means it was composed by slaves and sung in a back-and-forth responsive fashion. According to The New Oxford Book of Carols, most of the slave songs were collected during the Civil War, mostly from slaves on the offshore islands of Georgia and South Carolina. The tune is related to various British folk songs, including a Welsh carol. It could be called an American shepherd carol, with the principal singer giving out the line and the chorus repeating the refrain. You can get a sense of this “Christmas Plantation Song” by reading the lyrics.

This simple song reminds us of the enduring power of music. Since most slaves wouldn’t have a printed Bible, they conveyed the Christmas story through their music. The leader would sing out, “There’s a star in the East on Christmas morn,” and the people would respond, “Rise up, shepherd, and follow.” The next line of the story would be sung, and the refrain repeated, “Rise up, shepherd, and follow.” The song would continue until the full story had been told. That’s how the gospel has always been passed along in oral cultures.

The message is simple and clear. When Jesus calls, we must “rise up and follow.” But as the song suggests, and as the disciples themselves would find out, it meant leaving everything else behind.

When Jesus enters, everything changes.
When Jesus calls, we must rise up and follow.
That’s still true 2000 years after Bethlehem.

Rise up, boys and girls!
Rise up, moms and dads!
Rise up, rich and poor!

There’s a baby in the manger.
Jesus has arrived.

I found a lovely arrangement of this song by the King’s Singers.

Father, give us eyes to see Jesus in a new and fresh way this Christmas season. Help us to see him as he is–a king sleeping in a stable. May we rise up and follow when he calls. Amen.