King in a Cradle 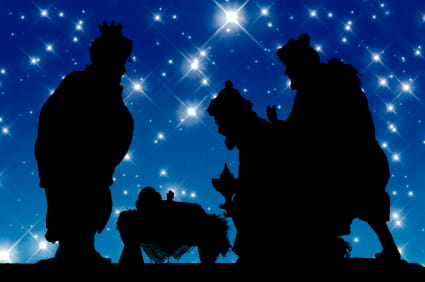 “On coming to the house, they saw the child with his mother Mary, and they bowed down and worshiped him" (Matthew 2:11).

When the Magi finally found the baby Jesus, were they disappointed? They might have been. After all they been through, after such a long journey, after the detour in Jerusalem, did what they find seem anticlimactic? It might have seemed that way.

But to the Magi, he was a king.

He possessed more royalty in a cradle than Herod possessed in his fine palace. He was greater in his infancy than Louis XIV in his ascendancy. He was more powerful as a child than Napoleon as an emperor.

But it did not seem that way. The eyes of flesh revealed nothing but a normal baby, gurgling and cooing, moving his tiny hands side to side, reaching eagerly for his mother’s breast.

Somehow the Magi saw beyond the present and into the future and in deep faith, they worshipped him. They saw that this child would one day rule the world and they were not ashamed to fall on their faces before him.

Let me paraphrase the words of one Bible commentator: Although we read that the Magi met Herod, we do not read that they worshipped him. But when they found this tiny baby, not yet two weeks old, rocking in his mother’s arms, these great men fell on their faces before him. To this baby they gave the honor due a king. What Herod craved, the baby received.

Lord Jesus, grant me eyes of faith to see you as you are, King in a cradle and Lord of the universe. Amen.

Next: God's Word to the World