Gifts Fit for a King 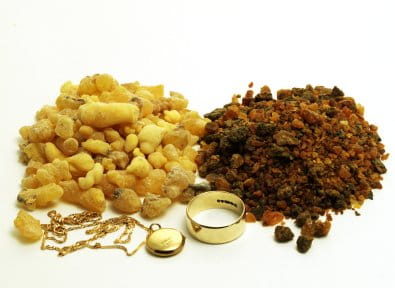 Now we come to the last detail, the one for which the Magi are most remembered: “Then they opened their treasures and presented him with gifts of gold, frankincense and myrrh” (Matthew 2:11). The gifts in themselves are expensive and represent a worthy tribute. But beyond that, there is a very ancient tradition that sees these gifts as symbolic of who this child would become.

The early church fathers said that gold represented the wealth and power of a king. Frankincense was used in the temple worship of the Lord. It represents his deity-He is truly God born in human flesh. Then there is myrrh-a kind of perfume made from the leaves of the cistus rose. It was used in beauty treatments, but when mixed with vinegar it became an anesthetic. After a person died, myrrh was used to anoint the body and prepare it for burial. John 19:39 tells us that Jesus’ body was bound in linen wrappings along with 75 pounds of myrrh and aloes. So the gift of myrrh pictures his suffering and death.

You ask, did the Magi understand all this? No, not at all. But God arranged it so that their gifts to the Holy Child would point us to who he is and why he came.

The hymn writer understood it perfectly. Listen to his words:

Born a king on Bethlehem’s plain,
Gold I bring to crown him again
King forever, ceasing never,
Over us all to reign.

Frankincense to offer have I,
Incense owns a Deity nigh.
Prayer and praising, all men raising
Worship Him, God on high.

Myrrh is mine, its bitter perfume
Breathes a life of gathering gloom,
Sorrowing, sighing, bleeding, dying
Sealed in the stone-cold tomb.

Then the last verse:

Glorious now behold him arise,
King and God and Sacrifice,
Alleluia, Alleluia
Sound thru the earth and skies.

This year and every year, and all during the year, we are invited to return to Bethlehem. A baby lies there who is King and God and Sacrifice. The King in the cradle. Before long, he will arise to do his work and the world will see him as he really is. For the moment, the baby sleeps in Bethlehem surrounded by regal gifts and foreign eyes wide with wonder.

My Lord, am I so busy this year that I have no time for you? Slow me down so that my gift to you may be an undivided heart.  Amen.

Next: The Boys of Bethlehem