Bronze Snake in the Wilderness 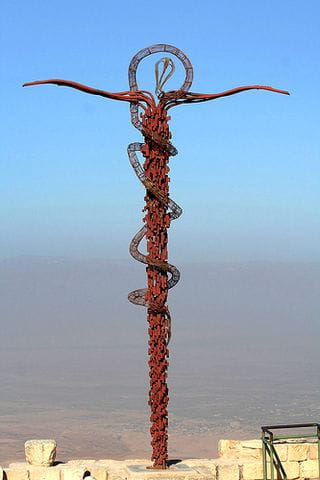 Nearly all of us know John 3:16. Let’s go back two verses and see what leads into that most famous of all the biblical promises. “Just as Moses lifted up the snake in the desert, so the Son of Man must be lifted up”(John 3:14). The first part of that verse refers to a strange moment in Israel’s history recorded in Numbers 21. There we learn that during the wilderness wanderings, the people began to murmur against God and Moses.”Why have you brought us out of Egypt to die in the wilderness?” (v. 5). After 40 years in the desert they were tired of the heat and the sand and the long marches from one place to another. Even the manna seemed disgusting to them. Finally, they had had enough. God heard their complaint and sent fiery snakes among the people. Many were bitten and many died. Panic swept across the tribes and they came to Moses and said, “We were stupid to complain after all that God has done for us. Please pray to the Lord that he would remove these poisonous snakes.” When Moses prayed to the Lord, he was instructed to make a bronze snake and put it on a tall pole where the Israelites could see it: “Make a  snake and put it up on a pole; anyone who is bitten can look at it and live” (v. 8). And that’s what happened. Anyone who looked, lived. Those didn’t, died.

What is the significance of the serpent? Recall that sin entered the human race through the serpent that deceived Eve (Genesis 3:1-6). Ordinarily lifting up a snake on a pole would be repulsive to the Jews. In this case it meant lifting up the symbol of the very thing that was killing them. John used this vivid image to teach us what the death of Christ really means. God took the hated symbol of Roman oppression (the cross) and turned it into the means of our salvation. Here is the next verse – the verse before the most famous verse in the Bible, “That everyone who believes in him may have eternal life” (John 3:15).

God has no other plan of salvation. Though some are offended by the bloody cross of Christ, those who look to the Jesus are saved forever. Look and live! That’s the gospel invitation.

O God, you could not have made it any simpler. Forgive us for complicating the message of salvation. May multitudes look to Jesus and be saved today. Amen.

Next: Lion of the Tribe of Judah