Last week, the Pope visited Ireland amid the tsunami of scandal related to sexual misconduct among priests (that had been actively covered up) that started making headlines in the 1990s. It didn’t help that his trip coincided with a breaking report of horrendous abuse in Pennsylvania in the United States.

That would have made the trip challenging enough. But there was an even larger crisis of faith he was stepping into. As a Washington Post article noted, “Once the most Catholic country in Europe, Ireland is now a place where only about a third of adults attend church weekly.” So while an appearance by Pope Francis resulted in 45,000 tickets being snapped up in a handful of hours, the comparison should be made to the 450,000 who came out in 1979 to hear John Paul II.

This has led to a cultural freefall. Once known for its Catholic conservatism, the country’s courts and legislature have recently overturned bans on contraception, homosexuality and divorce. And in two stunning referendums, “Ireland became the world’s first country to approve same-sex marriage by popular ballot (2015)” and, this past May, “swept aside one of the most restrictive abortion bans in the developed world in a landslide vote that marked its full emergence as a socially liberal state.”

As Crawford Gibbon, professor of history at Queen’s University Belfast noted, the two votes “illustrate how rapid Irish secularization has been—it has achieved in one generation what took centuries elsewhere.”

Of course Ireland is part of a larger shift throughout Western Europe. As a recent Pew Research Center report detailed, the “majority of Europe’s Christians are non-practicing.” Only 22% attend church services. And, let us remember, it was Western Europe “where Protestant Christianity originated and Catholicism has been based for most of its history.” 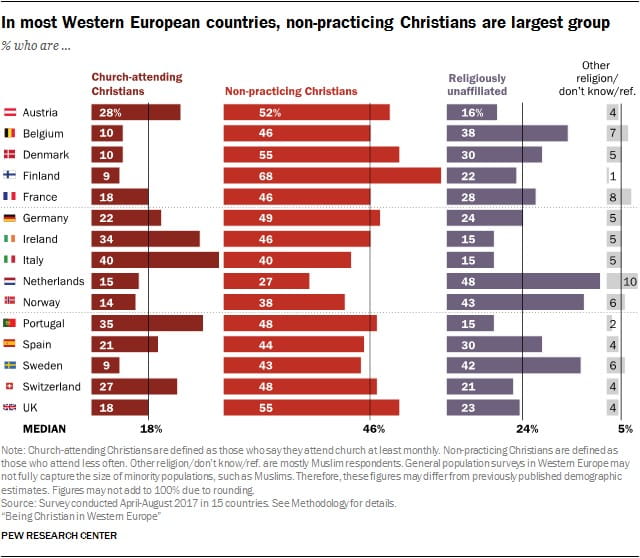 There are some positives in the data. While many do not believe in the God of the Bible, most tend to believe in some kind of higher power or force. They remain more positive than most toward churches. They want their children exposed to Christianity, or at least Christian values.

So while much can be lamented, there are rays of ongoing hope. But in that interplay one thing is for sure:

This is undoubtedly the last generational chance to save the West for Christ.

William Booth and Amanda Ferguson, “Pope Francis Is Set to Visit an Ireland Where the Catholic Church Is in Steep Decline,” The Washington Post, August 19, 2018, read online.