It’s common to find people and groups separating the two, but it’s quite clear that Jesus came bringing both. In fact, keeping them together is one of the more important exercises for Christian life and thought. As Henry Cloud has written, truth without grace is just judgment. Conversely, grace without truth is license.

During the talk, I outlined four ways we can “play” with grace and truth by putting grace on a vertical axis, and truth on a horizontal axis. 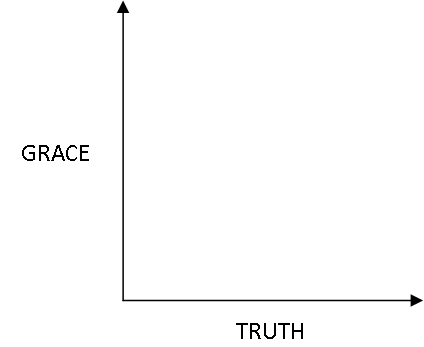 From this, I drew out four “quadrants,” exploring high and low perspectives of truth in conjunction with high and low views of grace.

In the talk, I walked through the four dynamics as they might relate to our personal lives. But it is actually a paradigm for evaluating entire systems of thought. A case could be made that the various dynamics related to grace and truth form the foundation for what separates Christianity from every other worldview.

There is the perspective of no grace, and no truth. 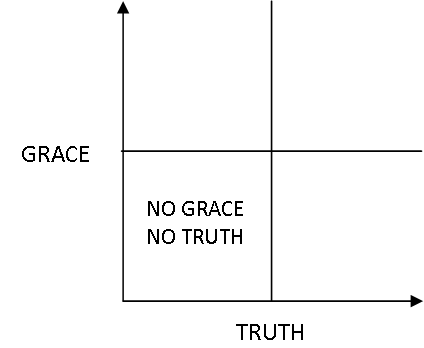 This would be reflected in systems based on “karma,” where there is not only a cause-effect perspective toward all of life (a lack of grace), but also a dynamic that what makes up right and wrong, good and bad, is left to choice (no truth).

Welcome to Hinduism. And while Buddhism has the four noble truths and the eight-fold path, both are generic enough in terms of “truth” to be placed in this quadrant as well.

Another quadrant is high on grace, but low on truth. 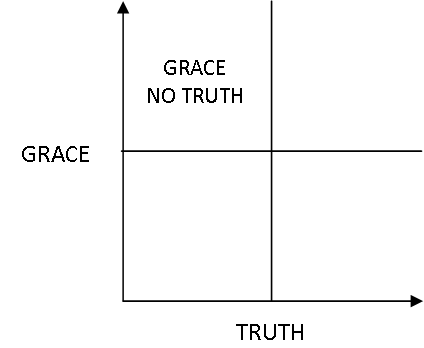 If you have grace, but no truth, you have licentiousness. In other words, almost anything goes in terms of life or thought. This is the “cheap grace” that Dietrich Bonhoeffer lamented so famously in his classic, The Cost of Discipleship.

Welcome to the Unitarian Universalists, recently highlighted for their growth in USA Today, who are accepting of not only everyone but seemingly everything. I tweeted the story when it came out, commenting that it was “the epitome of grace without truth.”

I would also argue that this is the unofficial pop culture stance of our day. Not only are we pressed to accept people relationally, but to simultaneously affirm whatever decisions or lifestyle choices they make. The joining of acceptance with affirmation is the new definition of acceptance. To not condemn means you must also condone. If you don’t condone, you are automatically viewed as condemning.

Then there is truth without grace. 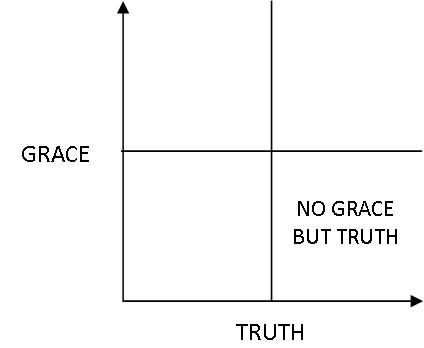 This is the worst of legalism and fundamentalism. There are rules and regulations, dos and don’ts, laws and legalities, but no grace. When there is truth without grace, there is only judgment and condemnation.

Not to mention a trail of bodies in its wake.

Welcome to Islam. And, sadly, many Christian churches and Christian movements.

Only authentic Christianity brings together both truth and grace. Which isn’t surprising considering that this is precisely what Jesus came to bring. In John’s gospel, a theological bombshell was offered almost as an offhand comment: “[Jesus] came ... full of grace and truth.” (John 1:14, NIV). 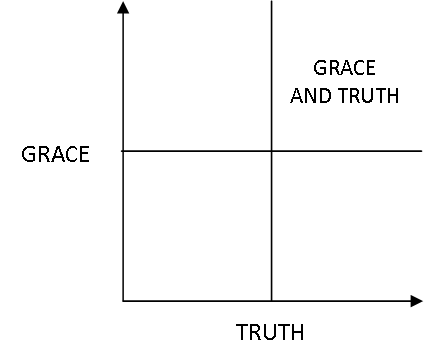 Jesus accepted the woman at the well in what can only be deemed by any careful reader in (then) culturally scandalous ways, but followed the acceptance by challenging her directly about her serial promiscuity.

He stopped the stoning of a woman caught in adultery, made it clear He was not going to condemn her, but then pointedly admonished her to stop hooking up.

Grace and truth flowed from Jesus in a way that can only be deemed inextricably intertwined.

And for good reason.

We need grace because we need acceptance and forgiveness.

We need truth because we need life-change and direction.

Here’s some homework for all of us:

For example, let’s get rid of a feel-good theology that airbrushes out any real talk of sin, as well as legalistic attitudes of harsh condemnation and judgment.

Who knows? By getting this one right, we might come dangerously close to New Testament Christianity.

Dietrich Bonhoeffer, The Cost of Discipleship.

On the series by James Emery White that detailed the “grace and truth” conversation, visit the Message Downloads page of ChurchandCulture.org for the series titled “Judged.”

On world religions, see the series by James Emery White titled “The Complete Idiot’s Guide to World Religions” on the Message Downloads page of ChurchandCulture.org.

Next: Five Reflections on Twenty Years