One Secret For Happiness

Regular readers of these humble ramblings (all tens of you) know what an over the top dog lover I am. I shared this illustration in my new book Stay.

A sick man turned to his doctor, as he was preparing to leave the examination room and said, "Doctor, I am afraid to die. Tell me what lies on the other side."

"You don't know? You, a Christian man, do not know what is on the other side?"

The doctor was holding the handle of the door; on the other side of which came a sound of scratching and whining, and as he opened the door, a dog sprang into the room and leaped on him with an eager show of gladness. Turning to the patient, the doctor said, "Did you notice my dog? He's never been in this room before. He didn't know what was inside. He knew nothing except that his master was here, and when the door opened, he sprang in without fear. I know little of what is on the other side of death, but I do know one thing... I know my Master is there and that is enough."  (Source unknown)

I love that thought. One of the stories that did not make the book Stay involved our Golden Retriever Charlie. 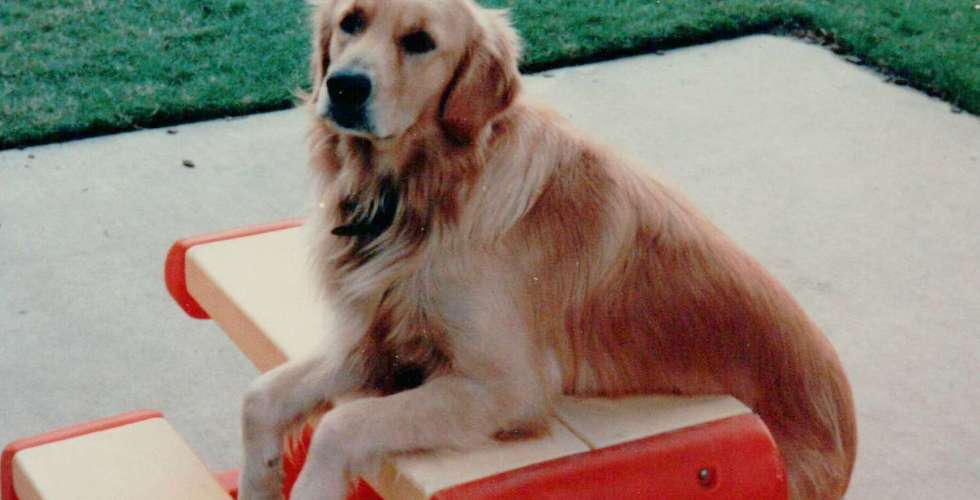 Charlie developed a large benign tumor under his front leg that made walking difficult. We took him in for what would be a rather serious surgery at his ripe old canine age of twelve. The vet did a masterful job in removing the growth and taking care of Charlie. My spiritual epiphany occurred when we were called to the animal hospital to pick him up. We waited as they brought Charlie out. He shuffled slowly out and I was taken aback by his appearance. Charlie was trembling, frightened and appeared to be in some pain. His head was down and his perpetual motion tail was strangely still. He seemed confused and disoriented. Then I walked over to Charlie and simply touched him. Almost immediately he quit trembling and he made a valiant attempt to wag his tail. We carefully got him into the car and took Charlie home to heal.

As I reflected on that scene it struck me that Charlie's reaction to my touch and mere presence was a wonderful illustration of how Jesus comforts (or desires to comfort) me. When I (his master) touched Charlie he was comforted. His pain was not gone. He was still frightened. He was still a bit disoriented and unsure. Charlie's circumstances hadn't really changed at all. But he knew that his master was there and that made it better. What a picture that is of how the touch of Jesus enables us to respond when we are frightened, in pain, disoriented and confused. We need to remind ourselves that Jesus never promised that all trouble would vanish when we believe in Him. In fact the opposite often happens. Jesus did promise that He would be there and that would be enough. My prayer for myself and for you today is that we will seek, realize, and be comforted by the touch of the Master in times of difficulty. Paul realized that contentment is not found in good circumstances. He wrote these words from prison while chained to a Roman soldier.

I rejoice greatly in the Lord that at last you have renewed your concern for me. Indeed, you have been concerned, but you had no opportunity to show it. I am not saying this because I am in need, for I have learned to be content whatever the circumstances. I know what it is to be in need, and I know what it is to have plenty. I have learned the secret of being content in any and every situation, whether well fed or hungry, whether living in plenty or in want. (Philippians 4, The Message)

I am so grateful that Paul did not write I "am" content and I "know" the secret. He was divinely inspired to honestly write that he had "learned" to be content and he had "learned" the secret of being content. It did come naturally or easily to Paul either. Don't be discouraged. If you are following Jesus and seeking the touch of the Master then you are learning as well. Contentment is learning how to be present in the present with Jesus. Our nature is to not enjoy the moment at hand and the blessings that usually surround us. Satan would have us living in regret of the past and fear of the future. Jesus said to follow Him. He told us our past is forgiven and our future is in His Hands. Enjoy the moment. Seek the touch of the Master. And continue "learning" to be content. It will change your life.

I would love to share more stories with you of faith, love and grace in my latest book Stay:Lessons My Dogs Taught Me about Life, Loss, and Grace. Click here for more info.

Next: The One Thing the World Really Needs Now