Christianity/ Bible / People of the Bible / Who was Zerubbabel in the Bible?

Who was Zerubbabel in the Bible?

Zerubbabel led the rebuilding of the temple in Jerusalem that Jesus would one day visit.
Compiled & Edited by BST & Crosswalk Staff

“This is the word of the Lord to Zerubbabel: Not by might, nor by power, but by my Spirit, says the Lord of hosts."  (Zechariah 4:6)

Zerubbabel: The Head of Judah

Zerubbabel was the grandson of King Jehoiachin of Judah (1 Chronicles 3:17) and therefore a descendant of David. Born in Babylon during the exile of Judeans, Zerubbabel migrated to Judah after King Cyrus II allowed the banished tribe to return to their home to restore the temple. The prophet Haggai identifies Zerubbabel as the head of Judah after the exile.

Zerubbabel was the head of the tribe of Judah at the time of the return from the Babylonian captivity in the first year of Cyrus. According to the story of Zerubbabel in the Scriptures: In the first year of Cyrus he was living at Babylon, and was the recognized prince of Judah in the captivity, what in later times was called "the prince of the captivity," or "the prince." On the issuing of Cyrus' decree, he immediately availed himself of it, and placed himself at the head of those of his countrymen "whose spirit God had raised to go up to build the house of the Lord which is in Jerusalem." It is probable that he was in the king of Babylon's service, both from receiving a Chaldee name Sheshbazzar, like Daniel and the three children, and from the fact that he was appointed by the Persian king to the office of governor of Judea.

Zerubbabel in Jerusalem: Rebuilding the Temple

On arriving at Jerusalem, Zerubbabel's great work, which he set about instantly, was the rebuilding of the temple. In the second month of the second year of the return, the foundation was set with all the magnificence which could be commanded. The efforts of the Samaritans were successful in putting a stop to the work during the seven remaining years of the reign of Cyrus and through the eight years of Cambyses and Smerdis. Nor does Zerubbabel seem quite completely innocent for this long delay.

The foundation of the new temple revealed that this was going to be significantly smaller than Solomon’s original, to the sorrow of those who recalled the former temple: "Many of the older priests and Levites and family heads, who had seen the former temple, wept aloud when they saw the foundation of this temple being laid" (Ezra 3:12). The prophet Haggai responded to their displeasure: "'Who of you is left who saw this house in its former glory? How does it look to you now? Does it not seem to you like nothing? But now be strong, Zerubbabel,’ declares the Lord... 'Be strong, all you people of the land,' declares the Lord, 'and work. For I am with you,' declares the Lord Almighty" (Haggai 2:3–4). 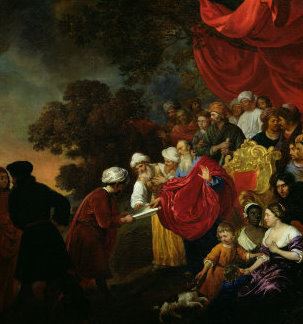 Zerubbabel displays a plan of Jerusalem to Cyrus the Great

The difficulties in the way of building the temple were not such as need had stopped the work but during this long suspension of sixteen years, Zerubbabel and the rest of the people had been busy in building costly houses for themselves. But in the second year of Darius, a light dawned upon the darkness of the colony from Babylon. In that year the spirit of prophecy suddenly blazed up with a most brilliant light among the returned captives. In a moment Zerubbabel roused from his apathy, threw his whole strength into the work. After much opposition and many hindrances find delays, the temple was at length finished, in the sixth year of Darius, and was dedicated with much pomp and rejoicing.

The Other Works of Zerubbabel

The only other works of Zerubbabel of which we learn from Scripture are the restoration of the courses of priests and Levites and of the provision for their maintenance, according to the institution of David (Ezra 6:18; Nehemiah 12:47) the registering the returned captives according to their genealogies, (Nehemiah 7:5) and the keeping of a Passover in the seventh year of Darius, with which the last event ends all that we know of the life of Zerubbabel.

GotQuestions.org - Who was Zerubbabel in the Bible?

Related People of the Bible