These are all of the chapters of the book of Judges. Clicking on a chapter will show you the text of that chapter of Judges in the Bible (New International Version). 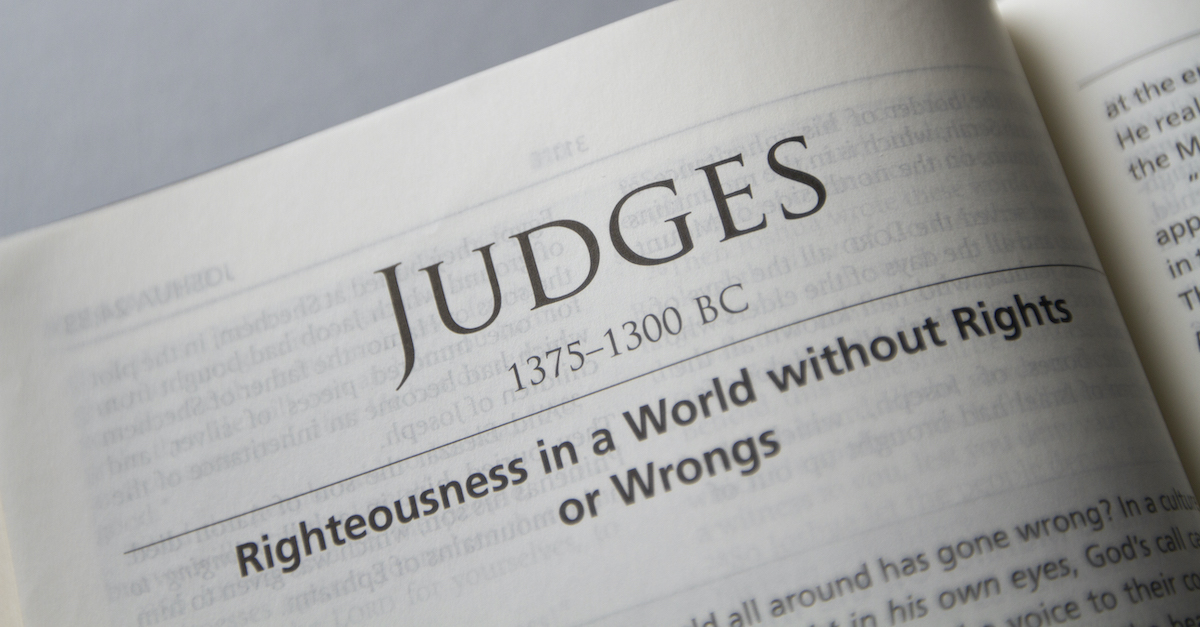 Who Wrote the Book of Judges?

The Book of Judges was more than likely written by the prophet, and last judge, Samuel. BibleStudyTools.com notes, “Although tradition ascribes the book to Samuel, the author is actually unknown. It is possible that Samuel assembled some of the accounts from the period of the judges and that such prophets as Nathan and Gad, both of whom were associated with David's court, had a hand in shaping and editing the material (see 1Ch 29:29).”

The book was written in tense time after Joshua had passed away and God’s chosen people, the Israelites, were inhabiting the long-awaited Promised Land of Canaan. The people did not have a king, but they did have judges to lead the nation.

Context and Background of Judges

“In those days Israel had no king; everyone did as he saw fit” (Judges 17:6). The nation of Israel, at last, was abiding within the borders of the Promised Land of God, but as with any blessing granted maintaining the land proved a challenge to fleshly hearts. The nation did not have a king, so judges were appointed to guide the great nation.

The book covers twelve men and women who were called up to lead. These judges sought to deliver Israel from its oppressors. These judges were not perfect; in fact, they included an assassin, a sexually promiscuous man, and a person who broke all the laws of hospitality. But they were submissive to God, and God used them (Life Application Study Bible).

Main Theme and Purpose of Judges

The main theme of the Book of Judges is to show that sin will indeed lead to downfall and pain, but God is gracious to forgive, restore, and love those who repent and seek to have a relationship with Him. It is the heart of God to not only lead His children but to have an enduring relationship with them, showing them favor and grace. The people of Israel were indeed human and found themselves seeking after the desires of the flesh. The judges called up to lead were not perfect either, but the recurring theme is redemption and coming back to the Lord.

The book begins with Othniel who captured a powerful Canaanite City. Ehud comes after leading God’s people to defeat the Moabites (later Ruth will come from the Moabites). Shamgar was known for defeating over 600 Philistines with an oxgoad.

Deborah is one of the more notable judges as she was a female leader. She was not only a judge but a wife and songwriter. She was a prophet of the Lord, meaning the Lord spoke to her of things to come that proved true. During this time in culture and history, it was extremely rare to see a woman lead, but Deborah is a great reminder that the Lord is the One who deems worthy, not the cultural standard. He entrusted Deborah with great qualities and secrets of what was to come, knowing she would be faithful in her obedience.

Gideon came after Deborah is known for the story of his testing with the fleece. The Lord spoke to him of a promise that Israel would have success against their enemies, but Gideon wanted a sign of proof. He asked the Lord not once, but twice to see dew on a fleece while the floor around the fleece to be dry. Both times the Lord proved faithful to Gideon’s request of a sign with a fleece so full of dew it could be wrung for a bowl full of water, while the surrounding floor was dry as a bone. Just as the Lord had promised, Israel saw victory to come.

Tola, Jair, Jephthah, Ibzan, Elon, and Abon followed in succession during the fifth period of the Judges. The sixth period produced perhaps the most well-known judge, Samson. An angel appeared to the mother of Samson before his birth, promising a great son to the barren woman. She was given the specific command not to cut his hair, and that he would lead the deliverance of Israel from the hands of the Philistines.

Samson grew, as did his hair, and his great strength. It was a strength far greater than any man of the age. Time passed and Samson fell into trusting a promiscuous woman, Delilah, who eventually weaseled the secret out of him that his great strength came from the fact that he had never cut his hair. In his sleep she cut his hair, and the Philistines she was working with gouged out his eyes and threw him in prison. Though his bondage of shackles and blindness Samson finally saw the truth: he desperately needed to return to the Lord God. Repentance offers true freedom. The Lord returns his strength to him and he brought down the roof of the Philistine temple. “Then he pushed with all his might, and down came the temple on the rulers and all the people in it. Thus he killed many more when he died than when he lived.” (Judges 16:30).

The enduring purpose of the Book of Judges shows that God can use anyone for His purposes, and He is always waiting with open arms to us to repent of our sins to follow His leading in love. The heart of the Lord is always towards us in kindness and the desire to bring us to the best.

What Can We Learn from Judges Today?

Themes from Judges are not just for that age but for all of time. Realizing that gender or cultural social status does not disqualify us from being used by the Lord is evident throughout Deborah’s story. At an age where women were not considered equal to men, God called upon a woman to not only be entrusted with words of the future to come but also to lead. God can use anyone, but it is the responsibility of those who He calls to be obedient and trustworthy to what He asks.

Gideon’s story is evidence that God will do what He promises to do, we do not need multiple signs to trust Him. Jesus would later say in Matthew 4, “Do not put your God to the test” meaning that despite our fears and insecurities the Word of the Lord is trustworthy. If He said it shall be done, it shall be done.

Lastly, the theme that as long as you have breath in your lungs you can come to repentance and right standing with God is evident through the life of Samson. Samson fell away from God, and the consequences of trusting those who were not aligned with God led to Samson losing his great strength, his freedom, and his sight. Just as the father was there ready to receive the prodigal son, so was God ready to receive Samson when he came with a repentant heart. God is a Father who forgives and restores. God honored Samson’s renewal in commitment to Him by restoring his strength and fulfilling the call upon his life to begin the deliverance of Israel from the hands of the Philistines. No matter how great our sin is, God wants us to return to Him. He is eager to forgive us and to give us His blessings once again.

Our Favorite Verses from Judges

Judges 2:1, “Now the angel of the Lord came up from Gilgal to Bochim. And he said, “I brought you up out of Egypt and led you into the land which I have sworn to your fathers; and I said, ‘I will never break My covenant with you”

Judges 2:16, “Then the Lord raised up judges who delivered them from the hands of those who plundered them.”

Judges 4:1-3, “Then Deborah and Barak the son of Abinoam sang on that day, saying, “That the leaders led in Israel, That the people volunteered, Bless the Lord! Hear, O kings; give ear, O rulers! I—to the Lord, I will sing, I will sing praise to the Lord, the God of Israel.“

Judges 4:9, “She said, “I will surely go with you; nevertheless, the honor shall not be yours on the journey that you are about to take, for the Lord will sell Sisera into the hands of a woman.” Then Deborah arose and went with Barak to Kedesh.”

Judges 13:2-5, “There was a certain man of Zorah, of the family of the Danites, whose name was Manoah; and his wife was barren and had borne no children. Then the angel of the Lord appeared to the woman and said to her, “Behold now, you are barren and have borne no children, but you shall conceive and give birth to a son. Now therefore, be careful not to drink wine or strong drink, nor eat any unclean thing. For behold, you shall conceive and give birth to a son, and no razor shall come upon his head, for the boy shall be a Nazirite to God from the womb; and he shall begin to deliver Israel from the hands of the Philistines.”

Judges 16:28-30, “Then Samson called to the Lord and said, ‘O Lord God, please remember me and please strengthen me just this time, O God, that I may at once be avenged of the Philistines for my two eyes.’ Samson grasped the two middle pillars on which the house rested, and braced himself against them, the one with his right hand and the other with his left. And Samson said, ‘Let me die with the Philistines!’ And he bent with all his might so that the house fell on the lords and all the people who were in it. So, the dead whom he killed at his death were more than those whom he killed in his life.”