These are all of the chapters of the book of Colossians. Clicking on a chapter will show you the text of that chapter of Colossians in the Bible (New International Version). 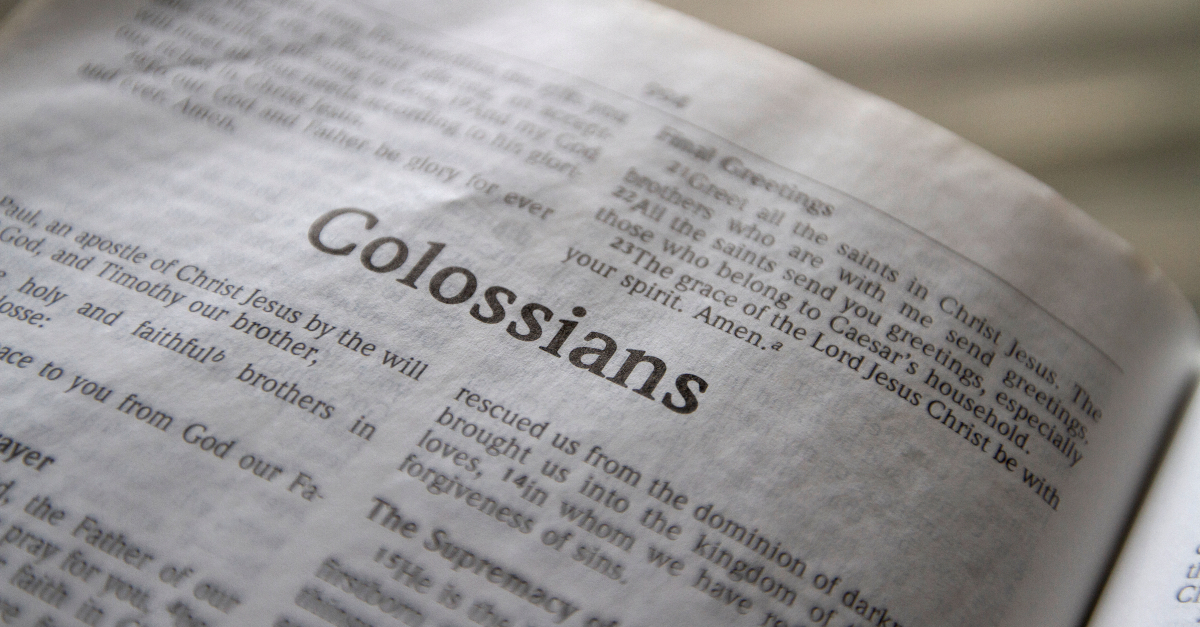 Who Wrote the Book of Colossians?

Colossians is a letter written by the Apostle Paul approximately A.D. 60-62 while imprisoned in Rome. Written to Christians living in Colosse, a small city located on the Lycus River in present-day Turkey, the letter was delivered by Tychicus and Onesimus alongside those Paul wrote to the Ephesians and to Philemon.

Context and Background of Colossians

Colossians was written during Paul’s first imprisonment in Rome. Multiple sources list a variety of dates within the timeframe of 57-64 AD. Paul was under house arrest for two years in Rome, and shortly after that time period, he was martyred.

Paul was under house arrest in Rome for approximately two years. During this time, he wrote the “Prison Letters” to Colossae, Ephesus, Philippi, and Philemon. Upon delivery of the letter, Tychicus shared the state of Paul’s imprisonment with them.

Colossae was located in the Lycus valley, once an important town along the great East-West trade route in Asia Minor. Centuries later, during the time period of this letter, it was no longer flourishing as grandly but still a market city. Christians there were mostly Gentiles.

The recipients of the letter were the congregates of Christian church Epaphras had planted in Colossae. Assigned by Paul to preach to the Gentiles in the Lycus Valley, the church he founded at Colossae was well known.

Main Theme and Purpose of Colossians

The main purpose of Paul’s Letter to the Colossians was to address the heresy (false teaching) Epaphras reported back to Paul while he was in Rome. “Colossian heresy was a mixture of an extreme form of Judaism and an early state of Gnosticism.” (NIVSB) Specifically, to speak against conflicting elements of Christianity with Oriental mysticism and asceticism. Additionally, they were being falsely advised to believe angel worship would add to their faith.

The doctrinal part of Paul’s letter (Chapters 1-2) warns the Colossians from being drawn away from Christ. Paul ensured the church that everything they needed is found in Jesus, and Jesus alone. Other teachers of biblical law were adding to the gospel, and in his letter, Paul brought them back to the essential gospel principles.

The practical part of Paul’s letter defines Christian character and boldly instructs them on how to live out their faith in Christ. Christians prominently guided by Judaism sought to overthrow the church at Colossae by impressing specific elements of their teachings: circumcision, the Law, and special seasons. Paul’s letter was meant to clarify and emphasize once more their freedom from the Law through their baptism in Christ, and to strike down the proposed necessity to worship/fear anyone but the Lord. “It is to set Christ forward, in this way, as Head over all creation as very God, and out of His relation to the church and to the universe to develop the Christian life, that they apostle writes.” (ISBE)

What Can We Learn from Colossians Today?

Paul’s Letter to the Colossians helps us to better understand Jesus Christ, and what His death on the cross means to believers. He is the Creator, Sustainer, and Author of our Salvation. When we have a clear understanding of who He is, it then affects who we become. Through our obedience to His word, His slow and holy sanctification in our hearts, our lives begin to reflect Christ. Through the power of the Holy Spirit living in every believer as a result of Christ’s victory over death on the cross, He reveals His wisdom to us. Paul encouraged the Colossians, and we can take note as well today, to keep our focus on Jesus. He alone provides peace that surpasses all understanding. Some specific lessons we can learn from the Colossians:

Our Favorite Verses from Colossians

“For this reason also, since the day we heard of it, we have not ceased to pray for you and to ask that you may be filled with the knowledge of His will in all spiritual wisdom and understanding, so that you will walk in a manner worthy of the Lord, to please Him in all respects, bearing fruit in every good work and increasing in the knowledge of God; strengthened with all power, according to His glorious might, for the attaining of all steadfastness and patience; joyously giving thanks to the Father, who has qualified us to share in the inheritance of the saints in Light.” Colossians 1:9-12 NAS

“Therefore as you have received Christ Jesus the Lord, so walk in Him, having been firmly rooted and now being built up in Him and established in your faith, just as you were instructed, and overflowing with gratitude.” Colossians 2:6-7 NAS

“Whatever you do, do your work heartily, as for the Lord rather than for men, knowing that from the Lord you will receive the reward of the inheritance. It is the Lord Christ whom you serve.” Colossians 3:23-24 NAS

“Devote yourselves in prayer, keeping alert in it with an attitude of thanksgiving; praying at the same time for us as well, that God will open up to us a door for the word, so that we may speak forth the mystery of Christ, for which I have also been imprisoned; that I may make it clear in the way I ought to speak. Conduct yourselves with wisdom toward outsiders, making the most of the opportunity. Let your speech always be with grace, as though seasoned with salt, so that you will know how you should respond to each person.” Colossians 4:2-6 NAS

Meg writes about everyday life within the love of Christ as a freelance writer, blogger at Sunny&80, and author of “Friends with Everyone, Friendship within the Love of Christ,” “Surface, Unlocking the Gift of Sensitivity,” and “Glory Up, The Everyday Pursuit of Praise,” and “Home, Finding Our Identity in Christ.” She earned a Marketing/PR degree from Ashland University but stepped out of the business world to stay at home and raise her two daughters …which led her to pursue her passion to write. A member of Faith Church in Sandusky, OH, she serves as Communications Director and leads Bible studies for women and teen girls. Meg is a Cleveland native and lifelong Browns fan, living by the shore of Lake Erie in Northern Ohio with her husband, two daughters, and golden doodle.