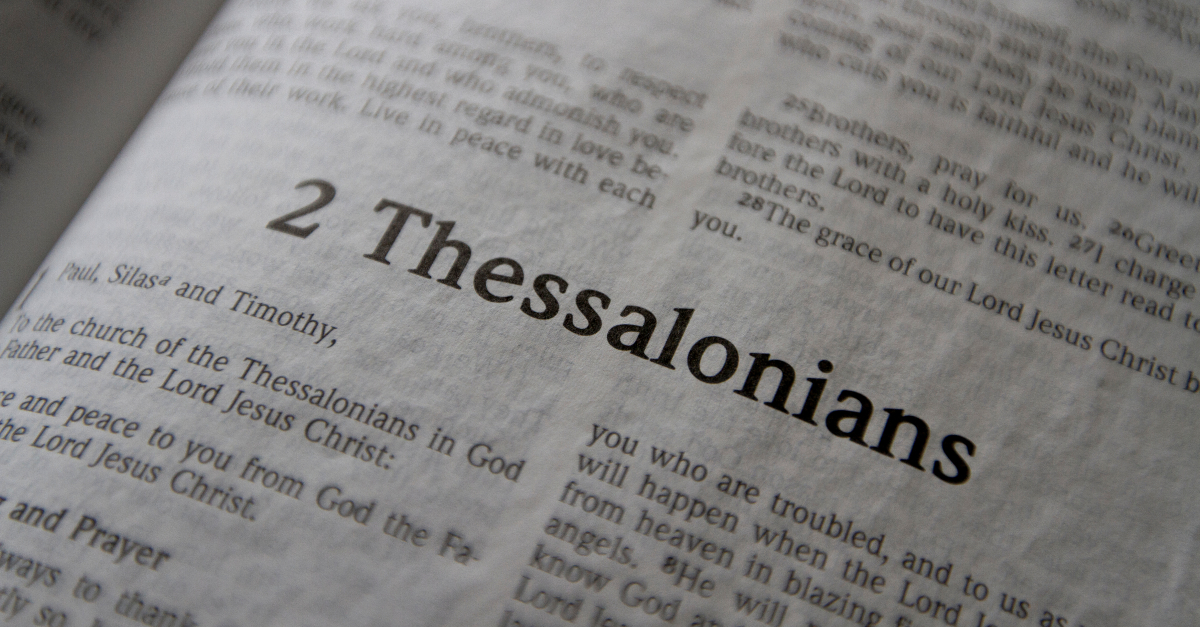 Who Wrote the Book of 2 Thessalonians?

This letter is attributed to the Apostle Paul although some have questioned the authorship based on ten vocabulary words not used elsewhere by Paul, it’s a little more formal in a different tone than Paul usually wrote, and the doctrine of ‘man of lawlessness’ is not in any of Paul’s other letters. Church fathers quoted from the letter in the second century, indicating it was accepted at that time. The opening words declare it is from Paul, Silvanus, and Timothy, the same writers of 1 Thessalonians.

Paul probably wrote this letter about six months after writing 1 Thessalonians, around AD 51-52.. It appears the situation at Thessalonica remained the same. In addition, some people left their jobs and their idleness gave rise to being busybodies meddling into other people’s lives. The church included many people who had come out of idolatry that implies that Paul had preached to gentiles there. Paul had worked very hard establishing the church (2 Thessalonians 3:7-9

Paul is writing to the early church and new believers. He wants to stop any confusion they have about their faith, especially the return of Jesus. Jesus has not returned yet, but one day he will. They should be aware of the events that will happen before Christ returns.

Chapter two refers to an unnamed ‘man of lawlessness.” There are several interpretations and theories about this person. It is most often connected to prophecies in Daniel chapter seven and the anti-Christ in Revelation 13. The term used, also called a son of perdition, is used in one other place, in John 17:12, to describe Judas. For that reason, some theologians believe Paul may have been referring to a betrayer[1] in the church.

Main Theme and Purpose of 2 Thessalonians

Paul wrote this letter with the same purpose as his earlier one. He wants to encourage them to hold fast against outside persecution, avoid false doctrine and the one he calls lawless, and to live a worthwhile and productive life. Paul responded to news that people who believed Jesus had already returned had left their jobs and become disruptive. He exhorts them to work for a living even as he showed them through his own example of hard work.

Paul fills the first chapter with thanksgiving for the believer’s faith, love, and continued perseverance. The second chapter focuses on clarifying end-times beliefs and truths about the return of Jesus. The final chapter focuses on correcting bad behavior. He concludes with a prayer for God’s peace to be among them and the grace of Jesus to be with them.

Paul states that they are praying that by God’s power they will live worthy lives and help them accomplish the works they feel inspired to do.

What Can We Learn From 2 Thessalonians Today?

Paul’s words and example remind us that to fill our hearts with gratitude, pray for God’s blessings, and work hard. His example of thanksgiving that permeates the letter is a reminder to express thanks to the people around us. Idleness still breeds disorder and meddling into other people’s lives.

In addition, Jesus will come again as Paul reminds us, but we need to wait on God’s timing and not believe false rumors about the end times. It’s been nearly 2000 years and we still wait patiently and cling to hope.

Persecution still exists and in some places in the world, Christians experience intense attacks. This letter helps as they remain steadfast in their faith.

Paul as in all his letters, models how to live as Christians. Paul’s concern for others as well as his concern that people examine information to discern truth reminds us that holding onto God’s truths keeps us grounded and focused on what God calls us to do.

Our Favorite Verses from Second Thessalonians

“We ought always to thank God for you, brothers and sisters, and rightly so, because your faith is growing more and more, and the love all of you have for one another is increasing.

We ought always to thank God for you, brothers and sisters, and rightly so, because your faith is growing more and more, and the love all of you have for one another is increasing.” – 2nd Thess. 1:3

“With this in mind, we constantly pray for you, that our God may make you worthy of his calling, and that by his power he may bring to fruition your every desire for goodness and your every deed prompted by faith.” – 2 Thess. 1:11

“Don’t let anyone deceive you in any way, for that day will not come until the rebellion occurs and the man of lawlessness is revealed, the man doomed to destruction.” – 2 Thessalonians 2:1-3

“For the secret power of lawlessness is already at work; but the one who now holds it back will continue to do so till he is taken out of the way. And then the lawless one will be revealed, whom the Lord Jesus will overthrow with the breath of his mouth and destroy by the splendor of his coming.” – 2 Thessalonians 2:7-8

“But we ought always to thank God for you, brothers and sisters loved by the Lord, because God chose you as first fruits to be saved through the sanctifying work of the Spirit and through belief in the truth.” – 2 Thessalonians 2:13

“But the Lord is faithful, and he will strengthen you and protect you from the evil one.” – 2 Thessalonians 3:3

“In the name of the Lord Jesus Christ, we command you, brothers and sisters, to keep away from every believer who is idle and disruptive and does not live according to the teaching you received from us.” – 2 Thessalonians 3:6

“For even when we were with you, we gave you this rule: “The one who is unwilling to work shall not eat.” – 2 Thessalonians 3:10

“Take special note of anyone who does not obey our instruction in this letter. Do not associate with them, in order that they may feel ashamed. Yet do not regard them as an enemy, but warn them as you would a fellow believer.” – 2 Thessalonians 3:14-15

Karen Whiting is a mom, author, international speaker, writing coach, and former television host who loves sharing ideas to strengthen families. She has written Growing a Mother’s Heart: Devotions of Faith, Hope, and Love from Mothers Past, Present, and Future. Check out her new book 52 Weekly Devotions for Family Prayer that includes a different way to pray each week plus stories and activities to explore questions children ask about prayer She loves adventure including camel riding, scuba diving, treetop courses, and white water rafting plus time at home crafting and baking.