These are all of the chapters of the book of 1 Corinthians. Clicking on a chapter will show you the text of that chapter of 1 Corinthians in the Bible (New International Version). 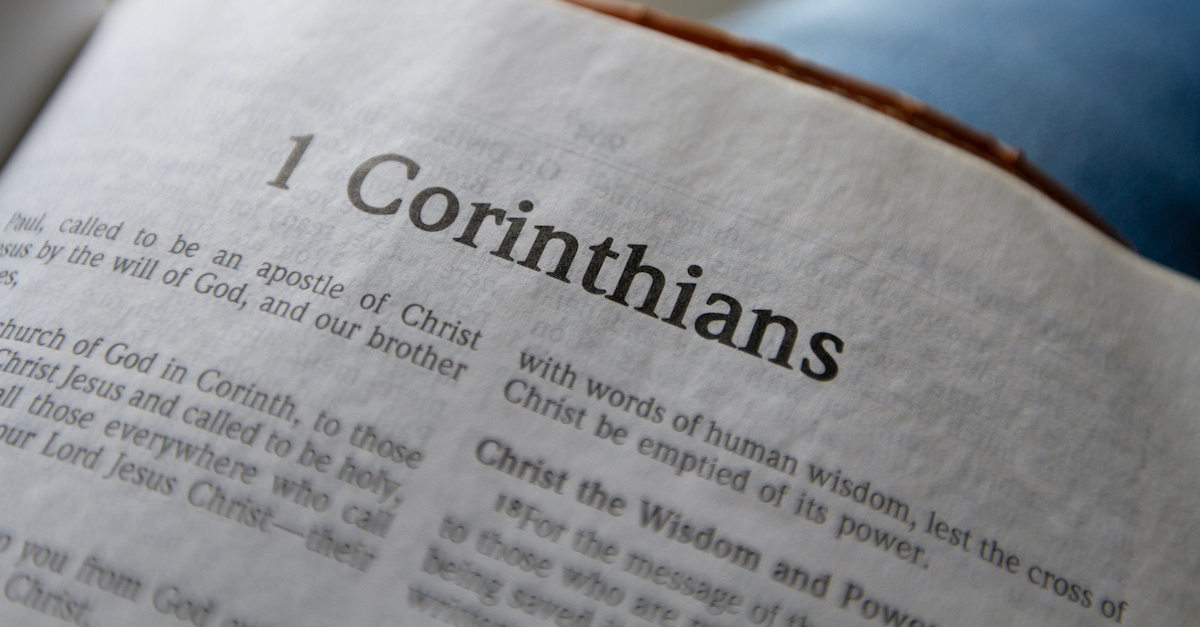 Who Wrote the Book of 1 Corinthians?

This letter to the church at Corinth begins, ‘Paul, called to be an apostle of Christ Jesus by the will of God, and our brother Sosthenes, To the church of God in Corinth’ (1 Cor. 1:1-2). It is agreed among scholars that Paul was indeed the writer of this letter. Sosthenes, who is also mentioned, was the leader of the synagogue in Corinth, who clearly accepted Paul’s message and converted to Christianity. Sosthenes is also mentioned in Acts 18:12-17, where he is again associated with Paul and his ministry in Corinth.

Paul wrote the letter somewhere around A.D. 53-55, and ‘confirmations of Paul’s authorship can be found as early as A.D. 95 when Clement of Rome wrote to the Corinthian church and cited this epistle in regard to their continuing problem of factions among themselves’.

Context and Background of 1 Corinthians

Acts 18 gives an account of Paul’s time in Corinth and the intense persecution he faced there. Yet it was here that a church was established, and it is clear that Paul continued to encourage and instruct them through his letters while he traveled. Having spent well over a year in Corinth, he was familiar with the congregation and the problems they faced.

Corinth was strategically located on an isthmus serving as a good stopping point between Rome and the East. Because of this geography, Corinth was a major center of commerce and trade. This vitally important city was intellectually proud, materially affluent, and morally corrupt. Such an environment encouraged people to freely indulge their desires, whatever they may be, without fear of consequence.

The letter can be structured into five distinct sections:

Answer to the Report of Divisions (Chapters 1-4)
Paul encourages the believers to join in unity and not divide themselves into factions.

Answer to the Report of Sexual sin among Believers (Chapters 5-7)
Sexual sin is within the Church is not acceptable and ruins relationships. Following Jesus can involve no compromise.

Freedom in Christ, and Sacrificing Liberty for Unity (Chapters 8-10)
Paul addresses the issue of eating food sacrificed to idols, lists his rights as an Apostle, and encourages believers to keep one another from stumbling.

Order and Love in Worship Gatherings (Chapters 11-14)
Paul addresses the use of gifts and keeping order in worship and concludes that the greatest gift is love, using the analogy of the church as a body.

Paul Confirms the Resurrection (Chapter 25)
Some in the church denied the resurrection was real or important. Paul confirms that it not only is it historically real but the foundation of our faith.

Main Theme and Purpose of 1 Corinthians

How should a Christian in the local church behave? Paul is writing to a young church in a hostile environment that is encountering many problems such as division, quarreling, sexual immorality, lawsuits, spiritual gifts, the Lord’s Supper and worship order, theological issues such as the resurrection and freedom in Christ, as well as issues married and single members were facing. The unifying element of this letter is instructing the church in what it means to live as Christians in a non-Christian world, ultimately bringing them to the idea that love itself is the primary driver and conclusion of how to live out faith. As believers, our behavior should set us apart to look different from the world around us.

Paul had several purposes for writing this letter to the Corinthians. His first purpose was to deal with moral problems and the divisions that had formed, as people had divided themselves into followers of Paul, Apollos, Peter or Christ (1:10). His second reason was to deal with several questions that had been asked in a letter the Corinthians had sent to him (7:1). A third purpose that appears throughout the book is Paul’s defense of his apostolic authority.

What Can We Learn from 1 Corinthians Today?

This letter from Paul to the church at Corinth has astonishing parallels for us today, in that we continue to struggle with many of the same issues as they did. The Corinthians experienced trouble with division amongst themselves, sexual sin, church discipline, application of spiritual gifts, interactions with the idol worship going on around them, and general disorder in the church. These issues continue to be seen in the church and deter our effectiveness in serving one another and the world around us. We are to always live in a way that brings glory to Christ.

The Greatest of These Is Love
Chapter 13 is among the most quoted passages of Scripture, and rightly so. It presents us with a faith grounded and expressed in love and commends Christian love as greater than any other spiritual gift we could possess. We are reminded that our spiritual knowledge, without love, amounts to little. In a world filled with hate and selfishness, the sacrificial love of Christ should be clearly evident in us.

Live in Unity
From the earliest days of the Church, believers in Christ have fallen into the dangerous trap of splintering into competing groups. We continue to do this today, judging one group of Christians over another. This is the exact opposite of what Jesus prayed for us. Instead, he prayed that we would be as one, and that is Paul’s message to Corinth.

Flee Sexual Sin
Corinth was a city steeped in idolatry and sexual sin. Likewise, our world is inundated with all types of pornography and sexual deviation. Society in general sees no issue with sex outside of marriage, in direct contradiction to the Gospel and extraordinarily relevant to us. Marriage is a picture of Christ and the church, and this is where sex is designed to be experienced. Sex outside of marriage not only dishonors Christ but leads to personal pain and ruin.

Also important is Paul warns us to avoid judging the people of this world who engage in such things, but to instead hold accountable those who are in Christ: “What business is it of mine to judge those outside the church? Are you not to judge those inside? God will judge those outside. ‘Expel the wicked person from among you’” (5:12-13).

Our Favorite Verses from 1 Corinthians

1 Corinthians 1:10 – “ appeal to you, brothers and sisters, in the name of our Lord Jesus Christ, that all of you agree with one another in what you say and that there be no divisions among you, but that you be perfectly united in mind and thought.”

1 Corinthians 1:18 – “For the message of the cross is foolishness to those who are perishing, but to us who are being saved it is the power of God.”

1 Corinthians 2:9 – “However, as it is written: ‘What no eye has seen, what no ear has heard, and what no human mind has conceived – these things God has prepared for those who love him.’"

1 Corinthians 13:13 – “And now these three remain: faith, hope and love. But the greatest of these is love.”