These are all of the chapters of the book of Micah. Clicking on a chapter will show you the text of that chapter of Micah in the Bible (New International Version). 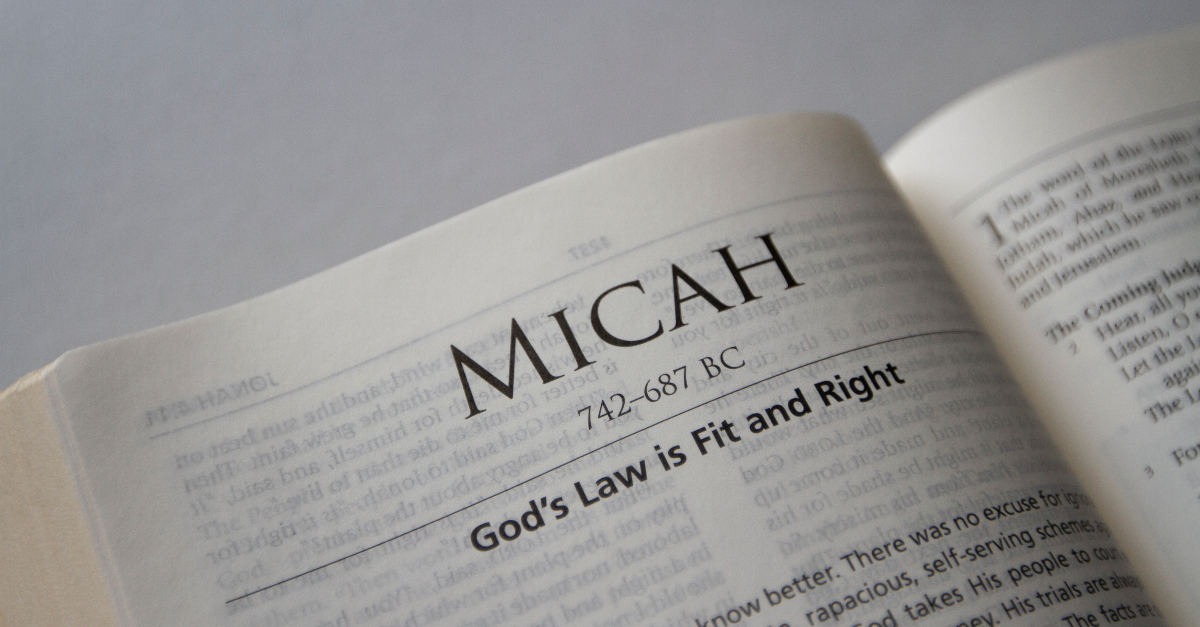 Who Wrote the Book of Micah?

Micah, a prophet during the reigns of Jotham, Ahaz and Hezekiah, would’ve been a contemporary of Hosea and Isaiah. The text mentions nothing about his familial background but does say more about the place he originated: Moresheth, a place about 22 miles away from Jerusalem. The author of the book is not heavily disputed, as the prophet declares his authorship in the first verse (Micah 1:1).

Context and Background of Micah

Micah wrote this during 735-700 BC, during a time of great prosperity in Jerusalem, especially under the rule of one of Judah’s better kings: Hezekiah. Nevertheless, they faced some threats from other kingdoms such as Assyria. Considering the Northern Kingdom fell to Assyrian forces in 722 BC, this would’ve been at the forefront of Micah’s mind, as he lived in the Southern Kingdom and would’ve witnessed the carnage.

Aware of the “social ills” of his day, Micah didn’t want the Southern Kingdom to end up in the same state as the North. Since Micah likely wrote this prior to Hezekiah’s reign, he would have been under the rule of a wicked king like Ahaz (2 Kings 16). Ahaz subjected himself to be a vassal of Assyria, instead of trusting in God. He practiced idol worship and tore down elements of God’s temple. Micah predicts the fall of Samaria (the Northern Kingdom) in this book and serves several warnings to the people of Judah.

Main Theme and Purpose of Micah

Micah serves to alternate between oracles of destruction and hope. He tackles three separate cycles in this work:

First: God will judge and then restore both kingdoms. We can see the judgment here: Micah 1:2-2:13, but a remnant receives restoration at the end of that passage in Micah 2:12-13.

Second: Judah’s leaders fall under a harsh penalty but hope still lasts for the Israelites. Rulers such as Ahaz and false prophets were rampant during his day, and lead the people astray (Micah 3), but God would judge them harshly for their actions.

We see the hope for God’s people in Micah 4-5, when the mountain of the house of the Lord is established. In other words, instead of pining after false gods, the Israelites will worship God. Hope also arises when God rescues his people (Micah 4:6-13), and Micah foreshadows Christ in Micah 5, telling the readers this Savior will be born in Bethlehem.

Third: Micah’s lawsuit against the people in Israel continues. God reminds Israel how many times he has rescued them before, and yet they do not remain loyal to him. This cycle is particularly interesting, because he discusses hypocrisy that can arise from the law. People of Israel thought they could go through the motions and offer sacrifices to appease God, but God is saying, “That’s not the point. I want your love and loyalty, not burnt animals” (Micah 6).

What’s more, the Israelites followed in the way of evil people such as Omri and Ahab, to the point where the very fabric of society comes unraveled (Micah 7). Nevertheless, hope persists. God vows not to allow their enemies to rejoice for long over their downfall (Micah 7), and Yahweh will once more shepherd his people.

What Can We Learn from Micah Today?

First, even in the midst of tragedy, hope exists. Although the Israelites had sinned and scattered because of their trust in foreign nations, God vows to restore them and bring them back home. Even if we have strayed far from God, and have reaped consequences from those actions, we can still have hope in Jesus. He will restore us, heal us, and bring us back to him.

Second, we have to keep a watchful eye on how our leaders affect us. Micah lived during a volatile time in terms of kings. Jotham and Hezekiah tried to lead the people back to God, but Ahaz didn’t. In both the Northern and Southern kingdoms, a bad king could send the whole nation spiraling out of control. In our own lives, who do we let lead us? And are those leaders driving us closer to Jesus are farther away?

Fourth, works do not save us. The Old Testament has so many laws because it serves as a reminder how much we need salvation. We mess up constantly and need a Savior to redeem us. Good works don’t cut it. Good works are like dirty rags apart from Christ (Isaiah 64:6). We can’t do anything to inherit or earn salvation on our own. Salvation comes from Jesus. Yes, our faith should produce fruit and a joyful, giving spirit. That in turn lends its ways to works that do justice, love mercy, and walk humbly with God. But without the Holy Spirit inside of us, we cannot truly do such things.

Our Favorite Verses from Micah

Micah 5:2, “But as for you, Bethlehem Ephrathah, too little to be among the clans of Judah, from you One will go forth for Me to be ruler in Israel. His goings forth are from long ago, from the days of eternity.”

Micah 6:8, “He has shown all you people what is good. And what does the LORD require of you? To act justly and to love mercy and to walk humbly with your God.”

Micah 7:18, “Who is a God like You, who pardons iniquity and passes over the rebellious act of the remnant of His possession? He does not retain His anger forever, because He delights in unchanging love.”