Christianity/ Wiki / Christian Terms / What Is Transcendentalism? Beliefs of this American Movement

What Is Transcendentalism? Beliefs of this American Movement

Transcendentalism is a philosophical and social movement that emphasizes the inherent goodness of all nature and humanity and the belief that people can find truth through their own intuition and imagination. People are at their best when they are most self-reliant and independent.
Alyssa Roat Contributing Writer

Transcendentalism was a movement that arose in America, specifically New England, in the early nineteenth century, coming into its own in the 1830’s. Rather than an actual religious movement, adherents considered it a way of thinking. Though specific beliefs may have differed from person to person, in general, transcendentalism can be defined as what GotQuestions.org calls “a philosophy of intuition as a guide for spirituality.”

Some transcendentalists identified as Christians, usually Unitarians, and others as agnostics. The beliefs can be traced to roots in the ideas of Immanuel Kant, ancient Indian and Chinese scriptures, Platonism, and German and English Romanticism. As the way of thinking grew, it was reflected in the work of several notable American writers such as Ralph Waldo Emerson, Henry David Thoreau, and Henry Wadsworth Longfellow.

Originally, transcendentalism referred to a system developed by the philosopher Immanuel Kant focusing on analyzing the reasoning process in order to understand the true nature of reality. However, this was expanded into a worldview that embraced personal discovery of truth through experience and intuition rather than reason.

There are a couple core beliefs of transcendentalism.

1. Everyone is essentially good.

The first is that there is a divinity that pervades all nature and humanity. In other words, everyone is essentially good, but may need to pursue this goodness through thinking and self-determinization.

In Nature, Emerson, one of the leading thinkers of Transcendentalism, referred to humans as “gods in ruins,” and in his “Divinity School Address” in 1838, he described Jesus as one of many true prophets whose message was “the greatness of man.”

2. Truth can be discovered through personal experience.

Another core belief is that truth can be arrived at through one’s own experience. Though transcendentalists were often avid scholars, they ultimately championed American ideals of individualism and tried to discover truth for themselves rather than through reason or adherence to someone else’s specific views.

Many transcendentalists were also active politically and socially, or at least had strong views on social and political situations. They were known for supporting abolition of slavery, women’s rights, educational innovation, better conditions for workers, and communal living. 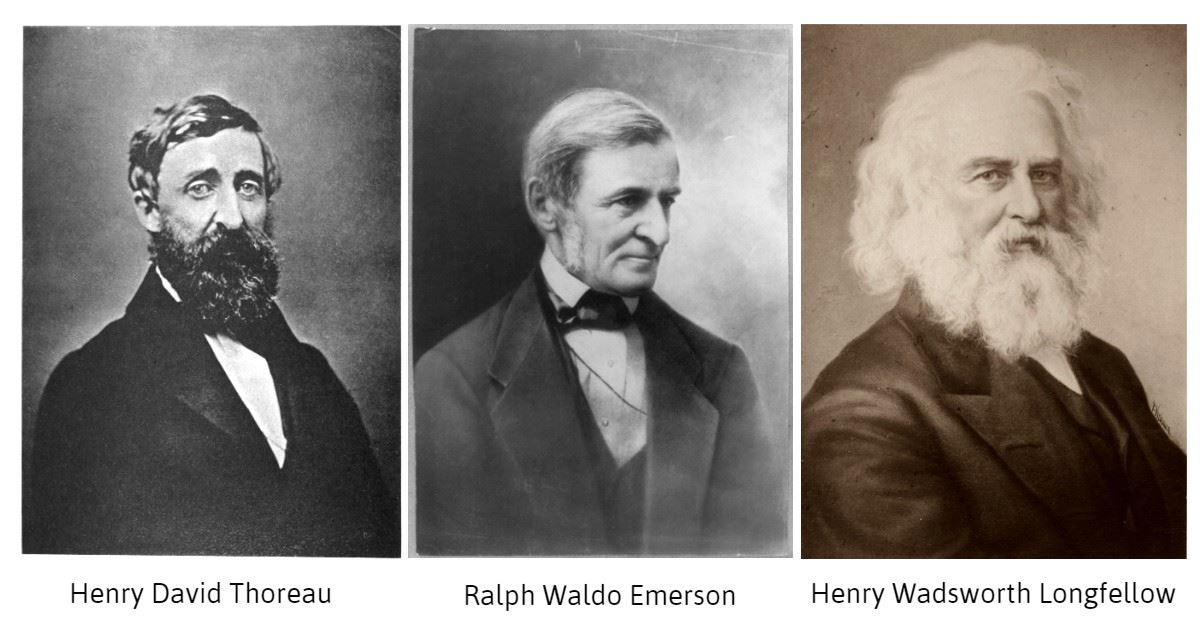 Transcendentalism became an organized way of thought upon the creation of “The Transcendental Club” in 1836, hosted in the Boston home of George Ripley. Early members of the club included Ralph Waldo Emerson, and between 1836 and 1860, the club was associated with members such as Nathaniel Hawthorne, Henry Wadsworth Longfellow, Walt Whitman, Amos Bronson Alcott (Louisa May Alcott’s father), and Henry David Thoreau.

The transcendentalists participated in experimental living as part of their philosophy. Many of the above figures were involved in the Brook Farm, a venture to establish a utopian farming commune that ultimately failed.

Thoreau struck out on his own in an attempt to live self-sufficiently in the woods near Walden Pond, where he built a hut and tried to live independently of society. (Supposedly; he was known to visit his friends, the Alcotts, frequently for meals.) From this experience he wrote the book Walden, now a classic text assigned in high school and college literature courses. Of his experience, Thoreau wrote,

“I went to the woods because I wished to live deliberately, to front only the essential facts of life, and see if I could not learn what it had to teach … For most men, it appears to me, are in a strange uncertainty about it… and have somewhat hastily concluded that it is the chief end of man here to ‘glorify God and enjoy him forever.’” (Walden)

In the 1850’s, transcendentalism began to fade out, and after the failure of the Brook Farm, ceased to be any sort of cohesive group.

Though The Transcendental Club may no longer exist, the ideas of the transcendentalists still live on through the works of writers such as Emerson, Thoreau, Hawthorne, and Longfellow that are now hailed as classics and studied by schoolchildren and scholars alike.

It may not seem like transcendentalism has any bearing on our lives today, but the abundance of texts by these thinkers in schools and its similarities to postmodern and New Age ideas of personal truth bring up questions for Christians about whether or not the ideas of transcendentalism are biblical.

Some ideas of some transcendental thinkers are widely held by Christians as well, such as the need for a personal relationship with God. A respect for nature also seems to be supported by the Bible, which speaks of nature as God’s creation, showcasing his majesty, and shows God placing mankind as stewards over creation (Genesis 1:28).

Furthermore, the transcendentalists’ emphasis on abolition, fair treatment of women, and better conditions for workers line up with the Bible’s instructions to look out for the poor and downtrodden and to seek justice.

However, some ideas of transcendentalism are clearly at odds with the tenets of the Bible. For example, the Bible is clear that humans are in a depraved state (Romans 3:10-12) and even nature suffers under the effects of sin (Romans 8:22). This goes against the transcendentalist idea of intrinsic goodness. Also, the Bible describes nature and humanity as creations of God (Genesis 1-2), not as divine themselves, contradicting the ideas of the divinity of nature and humanity or of humans as “gods in ruins.”

The Bible also does not teach that the Christian should discover truth based on his or her intuition or imagination. In fact, Proverbs 3:5 famously admonishes believers to “lean not on your own understanding.” After all, as it says in Jeremiah 17:9, “The [human] heart is deceitful above all things.” Instead, the Bible is to be the ultimate source of truth (2 Timothy 3:16-17).

Transcendentalism was a philosophical movement in the early nineteenth century that emphasized personal spiritual discovery. It lives on today mostly through the works of notable nineteenth-century writers such as Emerson and Thoreau. Though Christianity encourages a personal relationship with God, it is not compatible with ideas of discovering one’s own truth, and though nature and humanity are to be honored as God’s creation and made in the image of God respectively, they are ultimately broken and in need of a Savior, not divine or inherently good.

Alyssa Roat is a literary agent at C.Y.L.E.and a professional writing major at Taylor University. More than a hundred of her works have been featured in various publications ranging from The Christian Communicator to Keys for Kids.She has worked for various publishing companies, newspapers, and literary agencies and is currently a freelance editor with Sherpa Editing Services. Find out more about her hereand on social media @alyssawrote.

Alyssa Roat studied writing, theology, and the Bible at Taylor University. She is a literary agent at C.Y.L.E., the publicity manager at Mountain Brook Ink, and a freelance editor with Sherpa Editing Services. Her passions for Biblical study and creativity collide in her writing. Her debut novel Wraithwood releases Nov. 7, 2020. She has had 150+ bylines in publications ranging from The Christian Communicator to Keys for Kids. Find out more about her here and on social media @alyssawrote.