These are all of the chapters of the book of Nahum. Clicking on a chapter will show you the text of that chapter of Nahum in the Bible (New International Version). 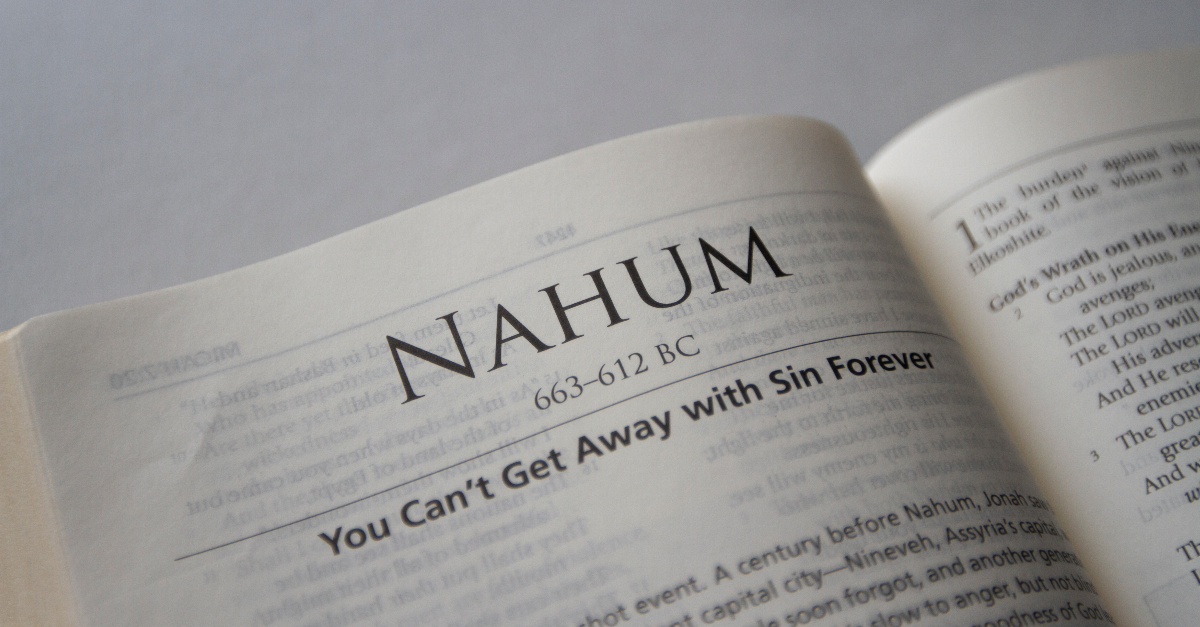 Who Wrote the Book of Nahum?

Nahum, a prophet in the 600s BC, came from a small village on the banks of the Tigris known as Elkosh. Some have attributed this place as a small village in Galilee, where Jesus ended up for part of his ministry. Some have even said it could be Capernaum, but we have no definitive evidence about this particular hometown of this minor prophet.

His name means “comforter”. Aside from his hometown and the meaning of his name, we don’t know much about this prophet. We do know, from the time frame of when the book was written (660-630 BC), Nahum would’ve been a contemporary of King Josiah (one of the few righteous kings of the Southern Kingdom of Judah), Zephaniah, and Jeremiah. He would’ve written this before the fall of the Southern Kingdom, and after the Assyrians had ransacked the Northern Kingdom.

Context and Background of Nahum

Assyria, to whom Jonah had preached more than 150 years before this book was written, had taken the Northern Kingdom captive. Even though they’d repented during the time of Jonah, a time of great turmoil in Nineveh, under the prosperous rule of future kings, Assyria appeared to revert to their crueler ways years later.

Known for their cruelty and severe mutilation of their victims (see Nahum 3), the Assyrians had reached a peak of their violence under the rule of Ashurbanipal, who happened to rule right around the same time Nahum wrote this book. Judah would’ve seen Assyria as a massive threat. They’d wiped out the Northern half of the kingdom of Israel, and if Assyria continued to be as formidable an opponent as they were under Tigrath-Pelzer and Ashurbanipal, Judah would be their next victim.

But after Ashurbanipal’s reign ended, Assyria’s power waned and they ultimately succumbed to the Babylonians, as predicted in this book. With this backdrop of Assyria’s dominance and threats, Nahum addresses this book to both Judah and Assyria.

Main Theme and Purpose of Nahum

First, this book is seen as a sequel of sorts to Jonah. Although Jonah preaches to the Ninevites (Assyrians) and they repent, they revert to their evil ways under new leadership. This seals their fate as the same as those from Edom, as predicted in the book of Obadiah.

Second, although, yes, God recognized the evil acts the Northern Kingdom of Israel had inflicted and allowed the Assyrians to take them captive, he doesn’t let them gloat over God’s people forever. We see this common pattern in the time of the judges: Israel sins. God allows them to be taken over by a group of people. Israel repents. God punishes those who took over Israel and brings Israel back home. Repeat.

Similarly, the same will happen to Nineveh, as predicted in this book. They won’t have the victory over Israel forever. Third, hope exists first for Israel, and second, for everyone. Not only will God restore Israel and bring them back home, but those who take refuge in God (Israelite or Gentile) will be restored. More on this in a moment.

What Can We Learn from Nahum Today?

First, we learn that evil doesn’t triumph forever. Sometimes God will give us over to the desires of our hearts (Romans 1) because we tell him those desires are what’s best – better than his plan. The Israelites trusted their enemies. They were vassals to Assyria, Babylon, and other kingdoms, who led them astray, and ultimately, betrayed them. Our sin does the same to us. But even when sin takes us captive, sin doesn’t triumph forever. God provides a way back home and restores us. Evil will not triumph forever, just like the Assyrians didn’t last forever.

Second, repentance isn’t the only step in a journey to a better relationship with God.

We see the Ninevites repent back in Jonah. They seem genuine in their want to turn away from their sin. But give or take a few bad leaders, and they end up worse than when they’d started. This leads to their ultimate destruction. Sometimes the church can operate in a model of, “Say the sinner's prayer, and wham! You’re a Christian.” However, we can forget the lifelong walk of faith a Christian must do. Brothers and sisters fall away all the time because leaders like Tigrath-Pelzer and Ashurbanipal in the media, in the workplace, and even in the church lead them astray.

Third, don’t attempt to destroy God’s people. Although God allowed kingdoms like Assyria and Babylon to take over Israel for a short while, because of their wicked ways, he doesn’t allow them to last for long. The world may attempt to destroy God’s people. We see it often in the media, in the workplace, and just about everywhere we go. But we can hope in the fact that God restores his people, has a plan for each and every one of us, and will not allow the wicked to prosper forever.

Our Favorite Verses from Nahum

Nahum 1:3, “The LORD is slow to anger and great in power, And the LORD will by no means leave the guilty unpunished. In whirlwind and storm is His way, and clouds are the dust beneath His feet.”

Nahum 1:7, “The LORD is good, a stronghold in the day of trouble, and He knows those who take refuge in Him.”

Nahum 1:9, “Whatever they plot against the LORD he will bring to an end; trouble will not come a second time.”

Nahum 1:15, “Behold, on the mountains, the feet of him who brings good news, who announces peace! Celebrate your feasts, O Judah; Pay your vows. For never again will the wicked one pass through you; He is cut off completely.”

Hope Bolinger is a multi-published novelist and a graduate of Taylor University's professional writing program. More than 1,200 of her works have been featured in various publications ranging from Writer's Digest to Keys for Kids. She has worked for various publishing companies, magazines, newspapers, and literary agencies and has edited the work of authors such as Jerry B. Jenkins and Michelle Medlock Adams. Her modern-day Daniel trilogy is out with IlluminateYA. She is also the co-author of the Dear Hero duology, which was published by INtense Publications. And her inspirational adult romance Picture Imperfect releases in November of 2021. Find out more about her on her website.