These are all of the chapters of the book of Lamentations. Clicking on a chapter will show you the text of that chapter of Lamentations in the Bible (New International Version). 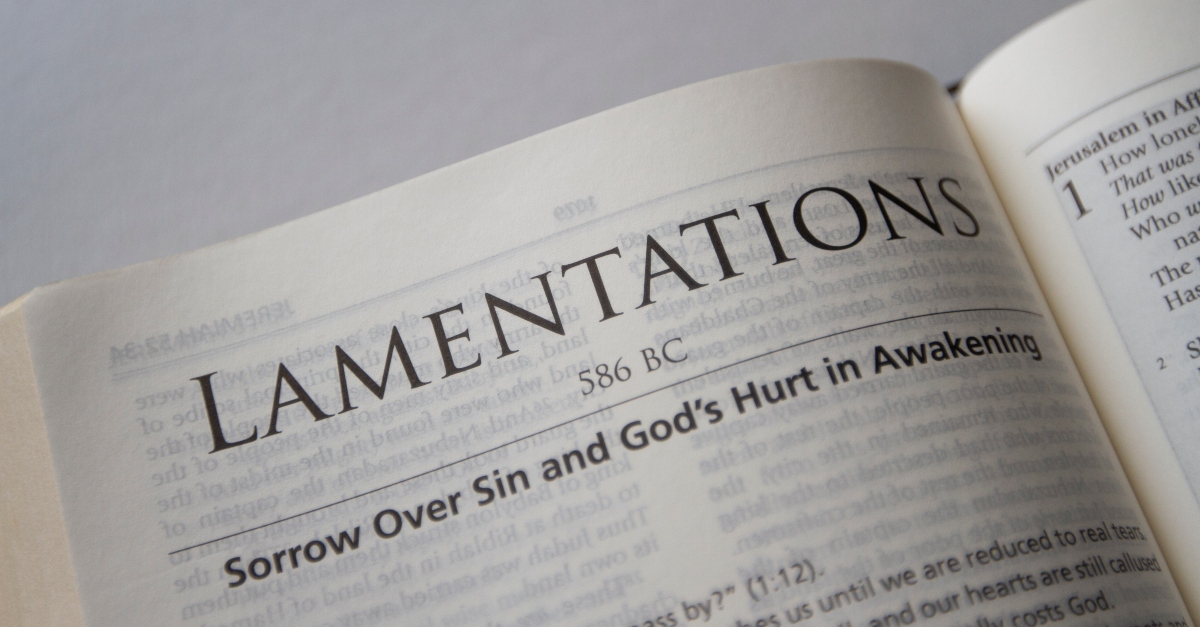 Who Wrote the Book of Lamentations?

Scholars have debated the authorship of the book of Lamentations. Most have attributed the authorship to the prophet Jeremiah, a prophet who lived during the Babylonian exile. Jeremiah would’ve been a contemporary of Daniel, Ezekiel, and Zechariah.

Given that Jeremiah had the title “the crying prophet,” because of his deep anguish for the Israelites during the time of the captivity, the voice and style of Lamentations seems to fit him.

Nevertheless, other scholars have proposed that Lamentations was written by several authors or someone else who witnessed the events of the Babylonian captivity. These scholars say the authors used slightly altered vocabulary and style than that of the prophet Jeremiah in the book of Jeremiah.

No matter who the author is, they would’ve witnessed one of the most tumultuous events in Israel’s history and remarked about it in this book.

Context and Background of Lamentations

Written in precise and grotesque detail about the events of the Babylonian raid on Jerusalem and captivity (Lamentations 4:1-22), we see that the once-lovely Jerusalem is no longer safe. Women are being raped, families are starving, and lawlessness abounds in the city of God.

The Book of Lamentations likely was written sometime between 587 BC or soon after the events transpired. However, some scholars believe the author wrote the book long after the temple had been destroyed in Jerusalem.

After the kingdom of Israel had split into the Northern and Southern kingdoms, each went their separate ways from God and pursued wickedness, idolatry, and the practices of other nations. Because of this, God allowed for other nations to conquer and invade the kingdoms for a brief period of time.

The Northern Kingdom fell first to the Assyrians in 722 BC, and not 200 years later, the Southern Kingdom fell to the Babylonians. Betrayed, the nations they’d once trusted and found their hope in either invaded them, mocked them, or did nothing to aid them in their time of greatest need. During the invasion and captivity, they learned to only trust in God and that placing your hope in anything other than him will only lead to destruction and sorrow.

Similar to the laments we find in the Psalms, this “dirge”-like book is similar to the style of writing you’d find in the Ancient world for funerals, symbolizing the funeral of sorts they have for the once-beautiful Jerusalem. This book also follows similar literary and acrostic forms (a type of Hebrew poetry that is organized based on the Hebrew alphabet, similar to Psalm 119).

Main Theme and Purpose of Lamentations

Despite its rather morose tone throughout all five chapters, in the midst of great tragedy, the main theme of Lamentations appears to be hope (Lamentations 3:22). No matter what circumstances may befall the narrator and his nation, that hope ultimately rests with the Almighty. His compassion will not fail.

We also see themes of affliction, especially in chapter 3 and chapter 1 as the author describes the desolation that has fallen upon Jerusalem and the afflictions the author has witnessed. And we find heavy themes of captivity and restlessness for Jerusalem, as the author represents the city as a female war prize. The author shows us what becomes of us when we pursue sinful ways. We end up starving and desolate and far worse off than where we started.

Nevertheless, despite the depressing tone of the book, the author reminds readers at the end to call upon the Lord to restore Jerusalem. As lawlessness abounds (Lamentations 5:2-14) they pray the Lord remembers them in the midst of their affliction.

What Can We Learn from Lamentations Today?

We can learn what it means to hope in the midst of the greatest trials of our lives, when God appears to be silent while enormous tragedies abound. We can also learn that even people of God can experience and witness awful events. Just because someone follows God doesn’t mean they won’t ever have to endure hardships.

As seen in many other prophetic books scattered throughout the Old Testament, we also discover what happens when we let our sin run rampant. Although many prophets are on the bookends of the tragedy of the Babylonian invasion, we see in Lamentations what happens when an author witnesses the events firsthand.

A clear depiction of the effects of sin are physicalized; Jerusalem in its splendor and with its magnificent temple is now starving, desolate, burned, and completely ravaged.

Although we may not see our cities toppled and our identities stamped out by a foreign nation, we can imagine that what the sin did to Jerusalem can spiritually affect our own lives. Nevertheless, God’s compassions never fail, and he will not forget us.

Our Favorite Verses from Lamentations

Lamentations 1:7, “In the days of her affliction and wandering Jerusalem remembers all the treasures that were hers in days of old. When her people fell into enemy hands, there was no one to help her. Her enemies looked at her and laughed at her destruction.”

Lamentations 3:22, “Because of the LORD's great love we are not consumed, for his compassions never fail.”

Lamentations 3:24, “I say to myself, ‘The Lord is my portion; therefore I will wait for him.’”

Lamentations 3:25-26, “The LORD is good to those whose hope is in him, to the one who seeks him; it is good to wait quietly for the salvation of the LORD.”

Lamentations 5:19, “You, Lord, reign forever; your throne endures from generation to generation.”

Got Questions: Book of Lamentations

Hope Bolinger is a multi-published novelist and a graduate of Taylor University's professional writing program. More than 1,200 of her works have been featured in various publications ranging from Writer's Digest to Keys for Kids. She has worked for various publishing companies, magazines, newspapers, and literary agencies and has edited the work of authors such as Jerry B. Jenkins and Michelle Medlock Adams. Her modern-day Daniel trilogy is out with IlluminateYA. She is also the co-author of the Dear Hero duology, which was published by INtense Publications. And her inspirational adult romance Picture Imperfect releases in November of 2021. Find out more about her on her website.