These are all of the chapters of the book of Daniel. Clicking on a chapter will show you the text of that chapter of Daniel in the Bible (New International Version). 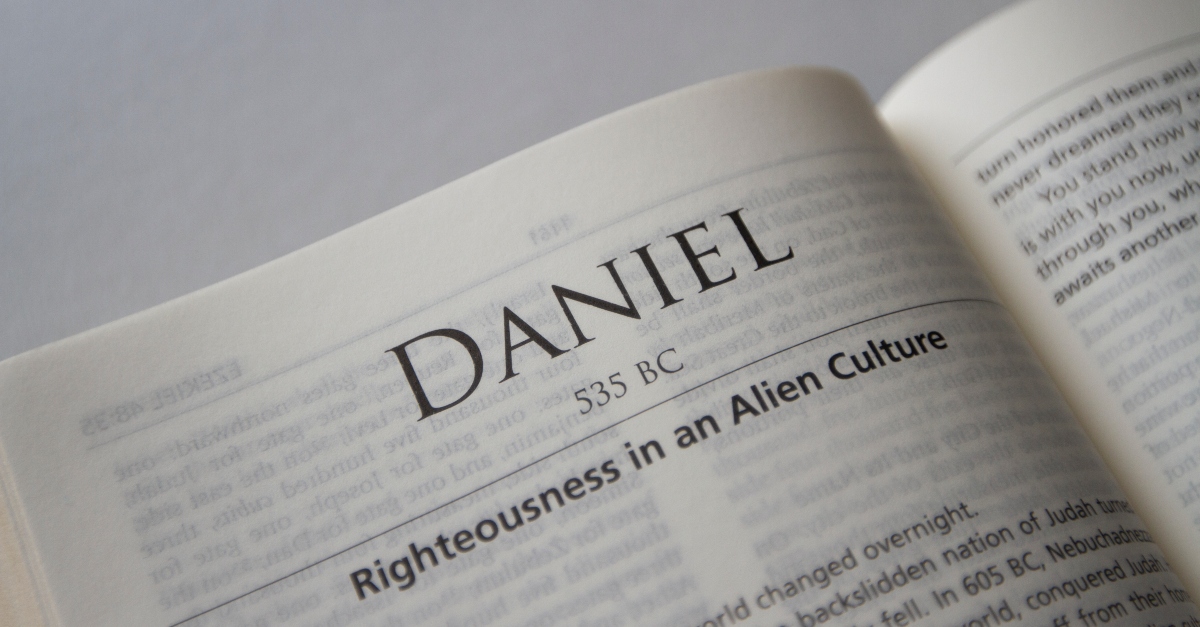 Although most scholars consistently agree that Daniel, an Israelite captive in Babylon during the sixth century BC, wrote the first six chapters of the Book of Daniel, some scholars debate as to who authored the final six. The chapters experience a shift in the language used, tone, and style, which contributes to this debate.

Most theologians do agree that Daniel wrote the entirety of the book. But some minority views, including those outside of the Christian faith, believe the final six chapter were written by a Jew during the time when Antiochus IV Epiphanes desecrated the Jewish temple with an abomination of desolation.

However, this shows a lack of belief in the power of prophecy – that the events of Antiochus IV could have been foreseen in a vision hundreds of years before happening. Most scholars agree Daniel is the author of all twelve chapters, and the differences of style, language, and theme are due to the shift of the Babylonian narratives (seen in chapters 1-6) to the visions Daniel experienced about events to come (chapters 7-12). The two sections are also intended for different audiences, which could explain the difference in language.

Context and Background of Daniel

The Book of Daniel was written during the life of Daniel in the sixth century BC in Babylon. Judah, the Southern Kingdom, had fallen to the greatest empire at the time, Babylon, and was taken into captivity in three waves. The prophet Daniel was taken captive in one of those waves.

During the time of writing this book, Daniel had lived through the reign and fall of the Babylonian Empire and the start of the Medo-Persian Empire when they invaded Babylon in Daniel 5.

As for the book’s recipients, that differs based on which section of the book the reader is in.

The first section, Daniel 1-6, known as the Babylonian Narratives, shows four Jewish men living holy lives in a pagan land. They work hard and excel in Babylonian society, without compromising their integrity or faith. The main audience for this book would have likely been Jews who were under an oppressive ruler.

However, Jews later living under strict Hellenistic or Roman rule would have found inspiration and comfort from the examples of Daniel and his three friends: Hananiah, Mishael, and Azariah.

As for the second section, Daniel 7-12, the audience for the visions Daniel saw are those who are living in the fulfillment. While the abomination of desolation did resemble Antiochus IV Epiphanes, it is also hinting at the antichrist at the end of time.

In other words, those who are at the end of time will also be the audience for Daniel 7-12.

Main Theme and Purpose of Daniel

The main theme of both sections of the book appears to be perseverance during a time of mass persecution and cultural genocide.

And in many cases, those who resist will face pain or execution (Daniel 3, 6 and 9).

What Can We Learn from Daniel Today?

First, we can see what godly living looks like in an increasingly pagan culture. Daniel and his three friends were in the center of Sin City, and still attempted to excel in every task set before them. Nevertheless, even though they were in the world, they weren’t of it. They were determined to make a stand for their faith, even if that meant persecution or death.

Second, we see reassurances of hope during the most desperate times. The antichrist will persecute believers in the future, but at the end of a metaphorical “seventy weeks,” the Son of Man will come and set everything right (Daniel 12).

Third, we see what loving our enemies looks like. A really intriguing part of the narrative is Daniel’s relationship with Nebuchadnezzar. This king stripped him of his land, likely killed people he knew in front of him, and tried to rebrand him as a Babylonian, but Daniel still appears to care for this Babylonian king (Daniel 4:19-20). Although we don’t have to agree with what our enemies say or try to coerce us to do (Daniel 3, 6), we can still care for them and pray for them often.

Daniel 2:27-28, “Daniel answered the king and said, ‘No wise men, enchanters, magicians, or astrologers can show to the king the mystery that the king has asked, but there is a God in heaven who reveals mysteries, and he has made known to King Nebuchadnezzar what will be in the latter days. Your dream and the visions of your head as you lay in bed are these.’”

Daniel 3:17, “If this be so, our God whom we serve is able to deliver us from the burning fiery furnace, and he will deliver us out of your hand.”

Daniel 9:19, “O Lord, hear, O Lord, forgive. O Lord, pay attention and act. Delay not, for your own sake, O my God, because your city and your people are called by your name.”

Daniel 10:12, “Then he continued, ‘Do not be afraid, Daniel. Since the first day that you set your mind to gain understanding and to humble yourself before your God, your words were heard, and I have come in response to them.’”

Daniel 12:1, “At that time Michael, the great prince who protects your people, will arise. There will be a time of distress such as has not happened from the beginning of nations until then. But at that time your people – everyone whose name is found written in the book – will be delivered.”

Enduringword.com, Daniel 1 – Keeping Pure in the Face of Adversity.

Hope Bolinger is an acquisitions editor at End Game Press, and the author 21+ books. More than 1400 of her works have been featured in various publications. Check out her books at hopebolinger.com for clean books in most genres, great for adults and kids.