These are all of the chapters of the book of Jude. Clicking on a chapter will show you the text of that chapter of Jude in the Bible (New International Version). 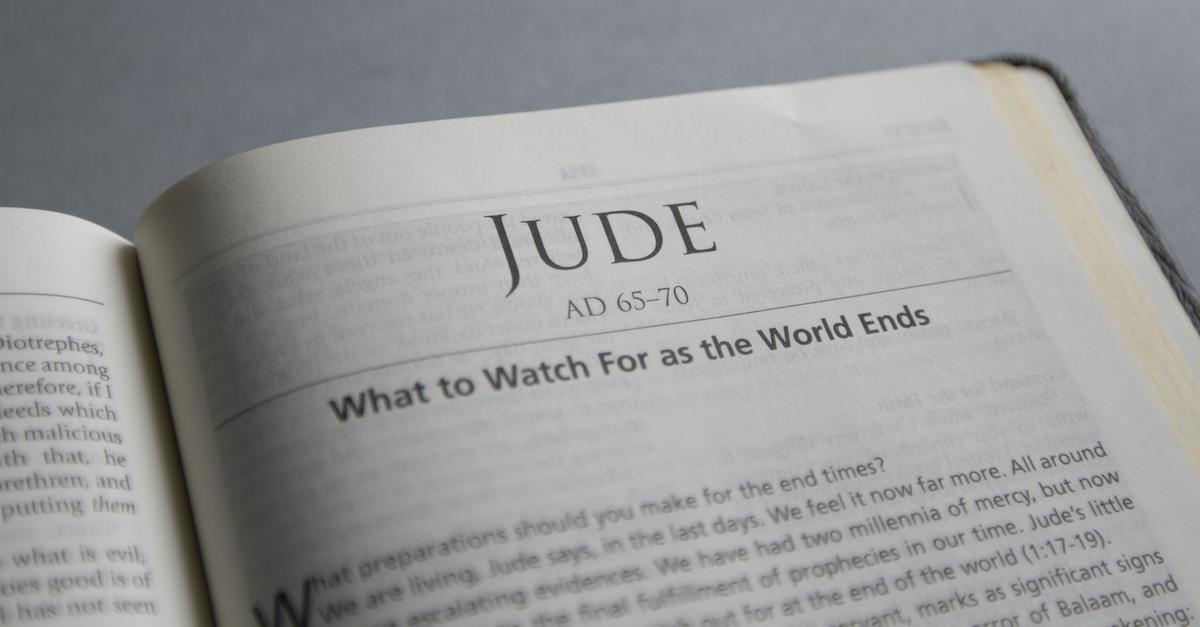 Who Wrote the Book of Jude?

The author of this short but powerful book identifies himself as Jude. Most scholars believe Jude was the half-brother of Jesus. Jude describes himself as a servant of Jesus and the brother of James, who was an apostle and church leader in Jerusalem. It’s interesting that neither James nor Jude promoted themselves as relatives of Christ. At one time there was a disagreement as to whether the book of Jude should be included in the canon of scripture. But one commentary observes: “The fact that the letter was questioned and tested but nonetheless was finally accepted by the churches indicates the strength of its claims to authenticity.”

Jude’s humility and godly perspective is reflected when he introduces himself as a “servant of Christ Jesus” ––rather than the brother of Jesus. Commentator Matthew Henry observes: [Jude] might have claimed kindred to Christ according to the flesh, but he waives this, and rather glories in being his servant. Observe… It is really a greater honor to be a faithful servant of Jesus Christ than to be akin to him according to the flesh.

Context and Background of Jude

There are two schools of thought on the date Jude penned his letter. The first, and more commonly accepted opinion is A.D. 65. An alternate opinion is that the letter was written as late as A.D. 80. Unlike other epistles, written to a specific church or individual, Jude felt the urgency to write to all Christians. This epistle is addressed namely, “to all those who are called, sanctified by God the Father, and preserved in Jesus Christ” (Jude 1:1). Jude writes to all who are called: Being sanctified by the Father and preserved in Jesus Christ (Jude 1:1).

False teachers were boldly teaching their heresies in the meetings of the congregation. In the infant stages of the New Testament, church evil imposters had already found their way into the congregations. While Jude’s first intent was to write concerning their so wonderful and common salvation, he was compelled instead to exhort them to contend earnestly for the faith (1:3). Jude urgently warns those who are called to beware of false teachers and perverse men who crept into their congregations without being noticed by true Christians (1:4).

Just as Jesus warned His disciples that false prophets in sheep’s clothing would creep into His flock (Matthew 7:15) Jude, with the same concern, writes to raise their awareness of these false followers who Satan uses to deceive and destroy Christ’s holy church. Jude describes how these ungodly men, who were long ago marked out for this condemnation, were turning the grace of God into lewdness and deny the only Lord God and our Lord Jesus Christ (see Jude 1:4).

You can imagine the urgency and desperation Jude would have had to train godly church leaders to do all that they could to guard the sound doctrine that had been passed to them. Jude’s letter attempts to train believers to be aware of how Satan worked all through history in attempts to deceive and destroy humanity with His lies and deceiving spirits (see Jude 1) Just as The Apostle Paul exhorted Timothy to entrust to faithful men all that they’d witnessed and heard (see 2 Timothy 2:2), so Jude calls true Believers to guard and pass on the sound doctrine of the gospel which is the foundation of the true Church.

Jude points out that the church leaders have somehow allowed these ungodly imposters to creep in unnoticed (1:4). In some of my favorite verses from this book, to help them be “noticed” Jude describes these apostates:

Finally, Jude calls true Christians to persevere by remembering the predictions of the apostles who warned how in the last times scoffers will come, following their own ungodly passions (Jude 1:18) Along with reminding them that they were living in the last days, he encouraged them to build themselves up in their most holy faith, praying in the Spirit, and keeping themselves in the love of God. And lastly, Jude inspires his reader to not only to work toward their own preservation, but also to compassionately snatch out of the fire others who are being deceived (Jude 1:22-23)

What Can We Learn from Jude Today?

Ecclesiastes 1:9 reminds us that there’s nothing new under the sun. Men who have a form of godliness but deny it’s power found their way into the early church, and are still today finding their ways to subtly creep into our churches. Paul warned in 2 Timothy 3:5, “from such men to turn away” when they weave truth with lies (one of Satan’s powerful schemes). In these last days, we must wake up to the enemy’s schemes to infiltrate the Jesus’ church. Satan plants ungodly men and women who claim to be teachers of truth. Some, knowing they’re a false teacher, look to build fame and fortune by preying on Christians ill-equip to discern their deceptions. But others, and possibly the most dangerous, are those who are themselves deceived. Second Timothy 3:13 describes them as “evil people and imposters [who] go on from bad to worse, deceiving and being deceived.”

Church, it is time to wake up! Stop being tossed to and fro with every wind of doctrine (Ephesians 4:14). Refuse to be one who’s always learning but never coming to the knowledge of truth (2 Timothy 3:7). False teachers are using scripture to deceive Christians into accepting their watered down, false message. Immature church leaders are allowing infectious immorality to creep into acceptance under the pretense of love. Men and women are weaving gossip and dissension in the body of Christ. Laziness and apathy is causing us to forsake Bible study and prayer. Satan was a powerful deceiver in the early church, and he’s working overtime today. He knows his days are short before the return of Jesus Christ the King.

Christian, take to heart Paul’s warning, “For the time will come when they will not endure sound doctrine, but according to their own desires, because they have itching ears, they will heap up for themselves teachers; and they will turn their ears away from the truth, and be turned aside to fables. But you be watchful in all things, endure afflictions, do the work of an evangelist, fulfill your ministry (2 Timothy 4:3-4).

Our Favorite Verses from Jude

As referred to in this article, our favorite verses are: Jude 1:12-19 because they help you discern characteristics of false followers. And Jude 1:20-23 should be the call to arms of every true Believer.

Jude 1:12-29, “These people are blemishes at your love feasts, eating with you without the slightest qualm—shepherds who feed only themselves. They are clouds without rain, blown along by the wind; autumn trees, without fruit and uprooted—twice dead. They are wild waves of the sea, foaming up their shame; wandering stars, for whom blackest darkness has been reserved forever. Enoch, the seventh from Adam, prophesied about them: ‘See, the Lord is coming with thousands upon thousands of his holy ones to judge everyone, and to convict all of them of all the ungodly acts they have committed in their ungodliness, and of all the defiant words ungodly sinners have spoken against him.’ These people are grumblers and faultfinders; they follow their own evil desires; they boast about themselves and flatter others for their own advantage. But, dear friends, remember what the apostles of our Lord Jesus Christ foretold. They said to you, ‘In the last times there will be scoffers who will follow their own ungodly desires.’ These are the people who divide you, who follow mere natural instincts and do not have the Spirit.”

Jude 1:20-23, “But you, dear friends, by building yourselves up in your most holy faith and praying in the Holy Spirit, keep yourselves in God’s love as you wait for the mercy of our Lord Jesus Christ to bring you to eternal life. Be merciful to those who doubt; save others by snatching them from the fire; to others show mercy, mixed with fear—hating even the clothing stained by corrupted flesh.”

Rhonda Stoppe is the NO REGRETS WOMAN. With more than 30 years experience of helping women build no-regrets lives. I could have listened to Rhonda talk all night, is what women say about Rhonda’s enthusiastic, humorous, transparent teaching, and zeal as an evangelist.

She’s committed to fulfilling the Titus 2:4 commission by mentoring, teaching and writing books that are inspiring, grounded in Scripture and easy to read––like you're visiting with a friend over coffee.

Rhonda is the author of 6 books and appears on numerous radio programs including Focus on the Family, Family Life Today and Dr. James Dobson’s FamilyTalk, & hosts The No Regrets Hour. She’s an evangelist and speaker at women’s events, College Women’s Chapel, Pastor’s Wives Conferences, MOPs and Homeschool Conventions. Sharing the gospel at her NoRegretsWoman Conference is her sweet spot. Rhonda is a regular contributor for Crosswalk and many other magazines.

Rhonda ministers alongside her husband Steve, who for 20 years has pastored First Baptist Church of Patterson, California.  They live out their own Real Life Romance writing books and speaking at their No Regrets Marriage Conferences, but their favorite ministry is their family. They have four grown children and 10 grandchildren. To learn more about Rhonda’s speaking topics, watch her teaching and to book Rhonda for your next event visit: NoRegretsWoman.com