Christianity/ Blogs / Russell Moore / Where is the Next Billy Graham?

Where is the Next Billy Graham? 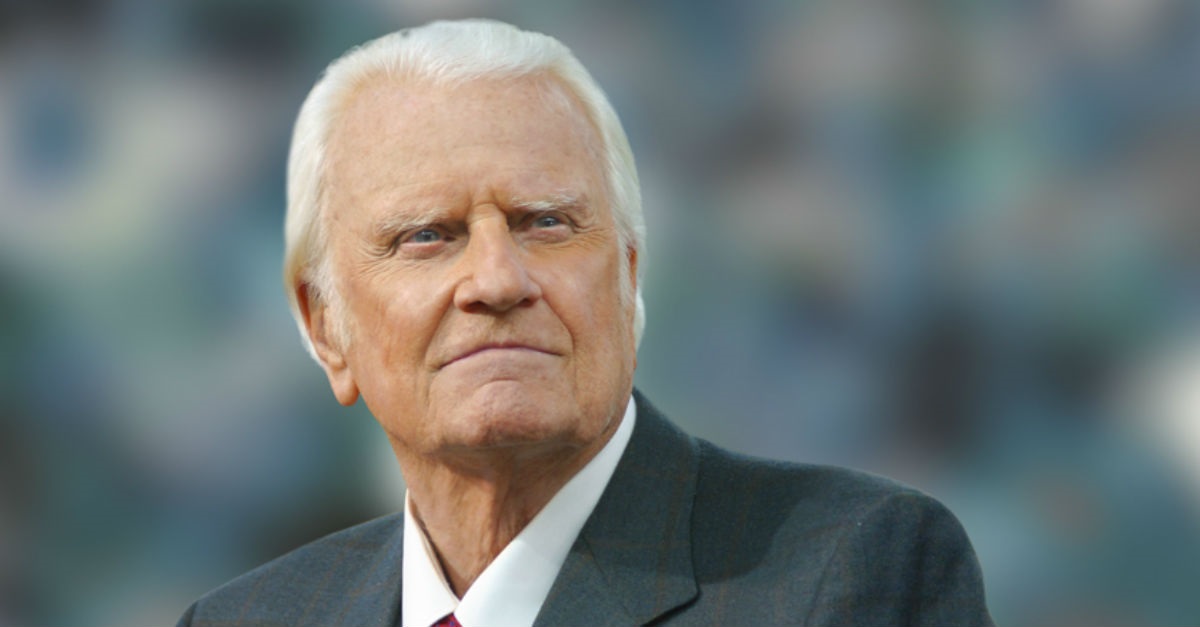 As a child, I remember being in church and seeing a man sitting in front of me, with his arm resting on the pew. The arm was covered with a large tattoo of a woman who was, well, let’s just say she didn’t fit what we would consider biblical standards of modesty in her attire. This was not in a “relevant” urban church, mind you, but in the most stereotypically “hellfire and brimstone,” King James Version-quoting, gospel hymn-singing southern revivalist church you could imagine. I couldn’t believe I was seeing this, in my church. I was simultaneously thrilled (when else does one get to see naked women in church?) and outraged (how dare anyone do that in my church?). So I nudged my grandmother and pointed, as if to say, “Can you believe this?”

My grandmother leaned down and whispered. I expected her to share my outrage (though not my secret titillation). She was, after all, a pastor’s widow with strict moral standards who had once washed my mouth out with soap because I had said “Gosh,” which was, of course, to her just a rebranded way to take the Lord’s name in vain. But that side of her didn’t show up in that moment. She whispered, “Yes, honey, He doesn’t know the Lord yet, and he’s had a hard life, with drink and drugs and all. But his wife had been trying to get him to come to church for a long time, and we’ve all been praying for him. He’s not trying to be ugly to anybody. He just doesn’t know Jesus yet.”

I’ll never forget that word “yet.” With that one word she turned my imagination on its head. She put before me the possibility that this hardened ex-military man with the naked woman tattoo might one day be my brother-in-Christ. And, in time, he was. I suppose as time went on this new Christian started to see that his tattoo was potentially a stumbling block to others, because I started to see it less and less as he started to wear long sleeves to church. Some of the other kids in the church said that (since tattoo removal technology wasn’t much of a thing then) that he had added a bikini to her, and then later a one-piece bathing suit. For all I know, he may have died with her in a plaid pantsuit and a briefcase. I guess this man started to see that tattoo as emblematic of an old life he’d left behind. He didn’t need a tattooed pastor (and in that church, he never had one). But he did need a church that didn’t see his tattoo as evidence of a life gone too far, of someone too rowdy to be loved with the call to repentance and faith.

I don’t like tattoos, and I can’t emphasize this enough (especially if you’re one of my children, one day, reading this). But if the Spirit starts moving with velocity in this country, our churches will see more people in our pews and in our pulpits with tattoos, and that ought to change our public witness. Now, what I do not mean by this is that we need more Christians to tattoo crosses or the Apostles Creed or the sinner’s prayer across their arms and necks. That’s not a sign of gospel awakening. It’s just, at best personal fashion, and, at worst, more marketing in an already over-marketed American Christian subculture.

Tattoos don’t mean what they used to. They don’t signify necessarily, by a long shot, the kind of “tough” image they used to. But sometimes they do. There are people around us with markings of blood-drenched skulls, or of profane sexual boasts or of threats to violence. Some demonstrate fearsomeness. Some are pagan, or even occult. As I see them in the streets around me I am chastened by how rarely my first thoughts are rooted in my grandmother’s wisdom. Again, not everyone with tattoos is an unbeliever or has lived a hard life. But I wonder how many people don’t listen to our gospel message because they assume they don’t “look” like the kind of people who would be Christians—namely shiny, happy Republicans. And, shamefully, how many times to we filter out our gospel preaching and our social witness to people who would , upon baptism, be able to pose nicely for our ministry advertisements? How often do we assume the good news of Christ is a message just like a political campaign or a commercial brand, targeted toward a demographic of a certain kind of buyer?

That was precisely Jesus’ point in his story of the two sons. He turned to the religious establishment and said, shockingly, “Truly, I say to you, the tax collectors and the prostitutes will go into the kingdom of God before you” (Matt. 21:31). That was Jesus’ point from his sermon in his hometown synagogue in Nazareth, throughout his public ministry, and right to his dying moments, pardoning a repentant terrorist. Jesus was building his church with those who seemed to have wrecked their lives forever: prostitutes, Roman collaborators, outcasts with infectious diseases, demon-possessed grave-dwellers, and on and on. If we’re really carrying forward his message, this means there are going to be people listening whose very bodies may carry messages contradictory of the Word of God. So did our hearts and psyches. The young woman with the “Legal Abortion Without Apology” tattoo or the old man with the Hell’s Angel marking, they may wonder, as they feel the pull of the gospel, “How can I enter with this visible reminder on me of my past?” That’s not a new question. That’s the question we all had to ask, regardless of how “respectable” we looked when we came to Christ: “Deep is the stain that we cannot hide? What can avail to wash it away?”

Jesus will build his church, with us or without us. But if we are going to be faithful to him, we must share his mission. This means we don’t just talk about lost people; we talk to them. And we don’t talk to them as enlightened life-coaches promising an improved future, but as crucified sinners offering a new birth. The hope for the future is not that Christianity will be seen as more respectable or more influential in the sectors of American power. The hope for the future is churches filled with people who never thought they fit the image of “Christian.” We’ll see that the markings on the flesh, whatever they are, count for nothing, but that what counts is a new creation (Gal. 6:15). We’ve come not to call just those who look like whatever Christians are supposed to look like, but the whole world. If the church is powered by the gospel, then the Body of Christ has tattoos.

That reality ought to crucify our dour, gloomy, curmudgeonly pessimism. Our fretfulness is evidence of defeatism, a sign of wavering belief in the promises of Jesus himself. That’s what the elderly theologian taught me, as I stood there and wrung my hands over the pragmatism, the hucksterism, the liberalizing tendencies I saw in the Christianity around me, and wondered, “Does gospel Christianity have a future in this this country at all?” He looked at me as though I were crazy. Of course gospel Christianity had, and has, a future. But the gospel Christians who will lead it may well still be pagans. He was right. Christianity is not like politics, rife with the dynasties of ruling families. God builds his church a different way.

But the Spirit of God can turn all that around. And seems to delight to do so. The new birth doesn’t just transform lives, creating repentance and faith; it also provides new leadership to the church, and fulfills Jesus’ promise to gift his church with everything needed for her onward march through space and time (Eph. 4:8-16). After all, while Phillip was leading the Ethiopian eunuch to Christ, Saul of Tarsus was still a murderer. And that happens over and over again, as God raises up leaders who seem to come out of nowhere, with shady pasts and uncertain futures. And none of us would be here, apart from them.

This article is adapted from my book Onward: Engaging the Culture Without Losing the Gospel, a version of this post originally ran in October of 2015.