What Knox Taught Me About God 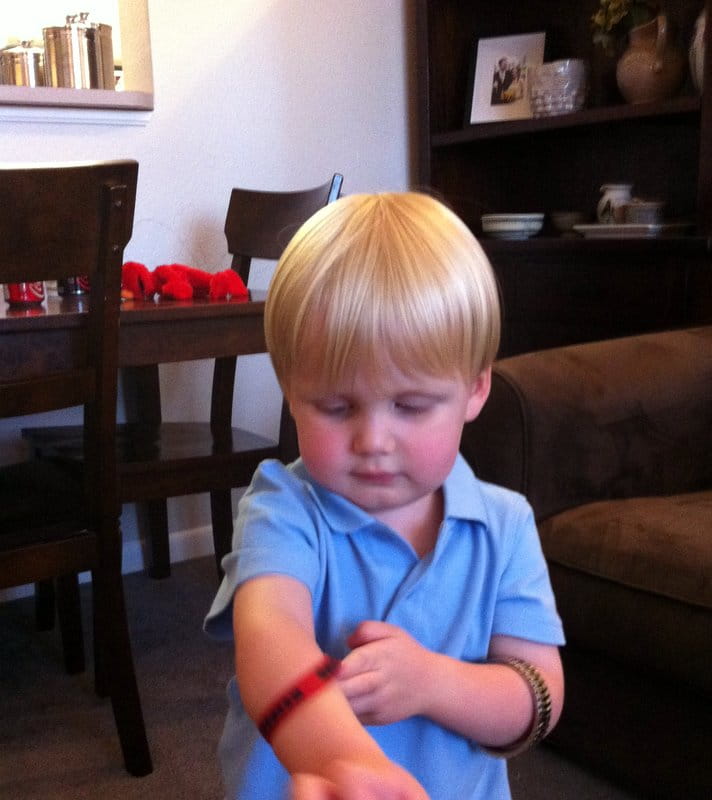 I am learning many things from Knox, our fine grandson who turned two a few days ago.

He was playing with his toys and throwing a ball and singing and running across the room (he does this all at the same time because he is a very smart boy–and busy too) when suddenly he stopped, looked at me, and said, “Wristwatch,” or something very close to that. He pointed to my Keep Believing wristband, which I took off. He balled up his fist so I could slide it onto his right arm. There it dangled in the air because his arm is much smaller than mine. Then he pointed to my wristwatch and started to pull it off. I helped him because the watch is big and clunky, but soon we got it positioned on his left arm. He held up his arms to make sure his parents saw his new armwear.

For another moment or two or three he fiddled with the wristband and the watch, but soon he took them off because they got in the way of throwing the ball, dancing around, playing with the iPad, picking up his monkey, and then running back and forth to see if I would follow him into the other room.

A lot of other things happened, which I cannot remember exactly but they were all very, very important. I could hear Marlene and Josh and Leah talking about this and that, and every once in a while a comment was directed at me. I didn’t have much to say because Knox had my full attention.

A few days later a thought came to me while we were at a food stand near Fair Park in Dallas. It happened that all the big people (which is usually my category) got seated at one of the tables on the patio next to the food stand. So I sat with Knox at another table. He is a very bright and attentive boy who notices everything that happens around him. I noted that he is very good at spotting planes flying overhead. “Plane,” he would say, pointing to the sky. Sure enough, there was a plane about to land at Love Field or DFW. “He never misses a plane,” his mother said. “He hears them before we do.”

And so it goes. Knox is talking, moving, gesturing, playing, singing, thinking, always on the move, always looking around. And that’s when it hit me.

I delight in this little boy.

Knox doesn’t have to try to do anything in particular. I can happily spend an hour watching him do whatever he does, and it is all delightful to me.

I think for the first time in my life I understand how God delights in his children. Psalm 149:4 says, “The Lord delights in his people.” I’m sure I’ve read that verse before, but I never understood it until now. The Lord delights in me as I delight in Knox. Even now, as I write these words, that thought amazes me. The Lord smiles at me as I smile at Knox. And my fiddling around with things that seem so important to me are about like Knox playing with my wristband and my watch. God takes pleasure in that too. My Father in heaven looks down and says, “That’s my boy,” and he is pleased with me as I am pleased with Knox.

The Bible says that a little child shall lead them. Knox has taught me about God, and he did it without even trying.

Next: Saved When She Was 93