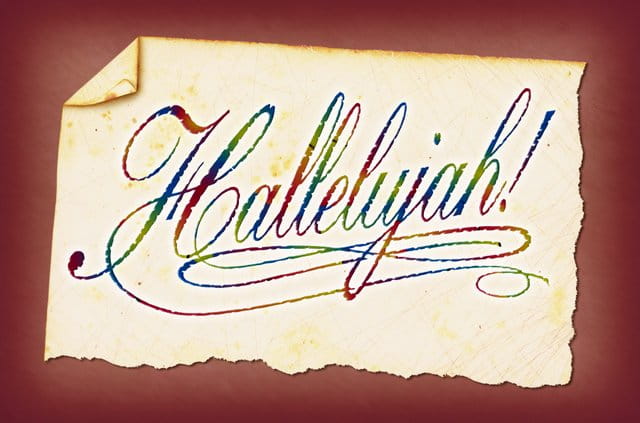 Watch the Opera Company of Philadelphia perform The Hallelujah Chorus at Macy's in Center City Philadelphia.

“He will reign over the house of Jacob forever, and of his kingdom there will be no end” (Luke 1:33).

It is easy to forget how revolutionary these words must have sounded in the beginning. They were …

Spoken by an angel
To a virgin
Announcing a baby
Who will one day
Rule the world.

And it came totally out of the blue.
To a teenage girl who was a virgin.
In Nazareth, a minor city in a remote corner of the Roman Empire.

It didn’t seem likely.
How would Mary’s baby have a kingdom that never ends?

After all, she and Joseph were betrothed (more than engagement, less than what we call marriage), they were poor, she was pregnant, and they didn’t have connections with the movers and shakers in ancient Israel.

They were just a young couple about to face a crisis pregnancy.
The whole affair would cast a shadow over them and lead to rumors and insinuations that would follow Jesus during his earthly ministry.

Even now after 2000 years, the angel’s message seems mind-blowing. What a series of predictions he made. This week my mind was drawn to the last phrase of verse 33, “And of his kingdom there will be no end.” As I thought about those improbable words, I found myself singing the Hallelujah Chorus, especially the part where the choir repeats “And he shall reign for ever and ever, For ever and ever, forever and ever.”

Jesus has a kingdom.
He is building it in human hearts around the world.
Someday he will return and visibly reign on the earth.
That kingdom—his kingdom—will never end.

The true followers of Jesus are the ultimate revolutionaries because they have concluded that only one thing will never end . . .

There are some men and women who are not like everyone else. They have been gripped with the thought that the kingdom of God is the greatest thing in the world, and that one thought has revolutionized their lives and reoriented their values. Kingdom issues are at stake. That’s the only possible explanation for the way they live.

Everyone reading my words has a choice to make. Either you join yourself to the kingdoms of this world that are doomed to fail. Or you join forces with Jesus Christ and follow him as your Savior and Lord.

His kingdom will never end. Why would you follow anyone else?

Lord Jesus, your kingdom is the only one that will last forever. Help me to live by kingdom values today. Amen.