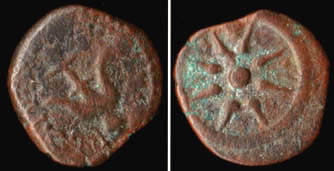 Front and back of the lepton (or "mite").
The widow gave two of these tiny coins.

“This poor widow has put in more than all those giving to the temple treasury” (Mark 12:43).

First things first. It’s “mites” plural, not the widow’s mite, as some people say. The term itself comes from the King James Version, which used “mites” to translate the Greek word lepta, a term that referred to a tiny coin worth almost nothing at all. If she had dropped in one coin, it would be a lepton, but she put in two coins, thus the plural term lepta.

Yes and no. It doesn’t matter in the sense that this poor widow had almost nothing to start with, so it’s the difference between putting one penny versus two pennies in the offering plate. Either way, you can’t meet your budget with one penny or with two.

It’s also true that we often favor the rich over the poor. That was a problem in the early church when the ushers would give the man with a gold ring the best seat in the house while making the homeless fellow stand in the back (see James 2:1-10). Big gifts impress us because we can do so much more with $5 million than with $5.

And, really, what good is 2 pennies?

But Jesus sees it differently. By the way, don’t miss the fact that Jesus sat down across from the temple treasury and watched as the people came with their offerings. Jesus pays attention to who gives and when and where and why. Those things matter to him.

Think about this. Jesus not only knows how much we give; he also notices how much we keep for ourselves. He’s not that impressed when a man worth $100 million makes a $5 million gift. In Jesus’ eyes, he didn’t give as much as the widow who gave two tiny coins.

Here comes this poor widow. She is about 60, maybe 5’4”, body worn from long years of labor, dressed in a simple hand sewn smock. As she approaches the treasury, she clutches two pennies in her hand. It is the smallest copper coin in Judea, worth almost nothing. It’s all the money she has. She throws the coins in the mouth of the receptacle. They make a tiny clink when they hit the bottom. Quickly she turns to go away. No one speaks to her. She’s just another widow. In a moment, she is gone. No one notices her.

No one except Jesus.

Let us learn from this that Jesus turns the values of the world upside down. We look at the outside; God judges the heart. We look at the amount on the check; Jesus looks at what it cost us to make the gift.

In his eyes, a rich man who gives a million dollars matters very little. But a widow who gives away her last two pennies earns his praise. In her act, Jesus saw a moving display of the true spirit of sacrifice. There is a lesson here for all of us. Strange as it may seem, our money is best used when we give it away.

Lord, forgive me for hoarding what you have given me. Help me to be generous with my time, my talent, and my treasure. Amen.

Next: The Sadducees Ask a Trick Question