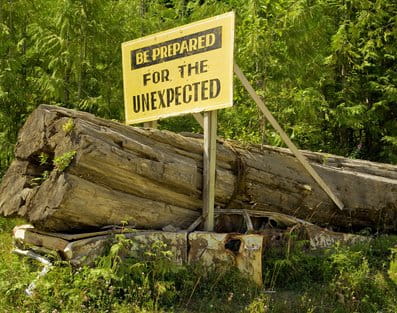 Jesus answered, "I tell you, Peter, before the rooster crows today, you will deny three times that you know me." Luke 22:34

Why did Peter deny knowing Jesus?

The answer is not difficult to find. Peter was scared and he was tired. That doesn’t excuse his conduct, but it does make it understandable. After all that had happened, Peter finally ran out of strength.

He never expected to be questioned by a servant girl. Her question caught him totally off-guard, and he blurted out an answer almost without thinking. But once he denied knowing Jesus there was no turning back. He had to play out the string.

I think Peter was ready to die for Christ that night. Just two hours earlier he was whacking off somebody’s ear. No, Peter was no coward. He knew the risk involved in going to the courtyard of the high priest. I think (though I cannot prove this) that if Peter had been brought before the high priest he would have said, “Yes, I am a follower of Jesus” and with a smile on his face, he would have followed his Master to the cross. That’s the kind of man he was.

What happened? He was totally unprepared to be questioned by a servant girl. She caught him off guard and he lied about knowing Jesus. But one lie leads to another. As Alexander Maclaren put it, “One sin makes many. The Devil’s hounds run in packs.”

What happened to Peter was no fluke. He set himself up by a long string of bad decisions. Here are the seven great mistakes he made that night:

1. He talked when he should have been listening.
2. He didn’t appreciate his own weakness.
3. He ignored Jesus’ warning.
4. He followed afar off.
5. He warmed himself at the wrong fire.
6. He was unprepared when the attack came.
7. He compounded his sin by first deceiving, then denying, and finally swearing.

Peter had no business warming himself in the company of the enemies of the Lord. As one writer put it, “If his faith had not already frozen, he would not have needed to warm himself by the fire.” By consorting with those who arrested Jesus, Peter was placing himself in a position where he would almost certainly be exposed. Peter warmed himself by the wrong fire until things got too hot for him.

Peter set himself up for a fall and when it came, it was a big one. “O what a tangled web we weave, when first we practice to deceive.” It is interesting to note that Peter fooled only himself. The others never really believed him. They sensed he was lying. Something in his face and the tone of his voice gave him away.

So it was that Peter—the “Rock"—had crumbled in the critical moment. He had denied his Lord not once, but three times. It was a failure he would remember for the rest of his days. As we think of it, let us take to heart the words of 1 Corinthians 10:12, “So, if you think you are standing firm, be careful that you don’t fall.”

We make a big mistake if we think that we would never do what Peter did. There’s a little Peter in all of us, and a lot of Peter in most of us.

His story reminds us of the danger of talking too much, listening too little, overestimating our strength, and underestimating our weakness. Learn from Peter’s failure so you won’t repeat it.

Lord Jesus, save me from myself. Amen.

Next: Did Judas Repent?