A large and growing number of parents – particularly parents of Generation Z children – are themselves in the “nones” category (those claiming no religious affiliation). And we live in a day and age where it has almost become a parenting sin to be overprotective, so the pendulum has swung the other way where today’s parents are underprotective (I recently blogged about that HERE.).

So how does an underprotective parent who is also unchurched raise their child spiritually?

As journalist Ruth Graham started an article she wrote in Slate: “I’m the kind of Christian that many adults warned me about as a child: I’ve been a church member for most of my adult life, but I have at times gone years without regular attendance, my theology is squishy and I don’t really pray, to name just a few qualities that put me on the breezy outer edge of Christianity’s big tent. I think of myself as ‘religious but not spiritual.’”

This is a textbook description of the spirituality of a typical “none.” And, as I detailed in my book The Rise of the Nones, the real mark of the “nones” is not a rejection of God, but a rejection of any specific religion. When it comes to content, dogma, orthodoxy – anything spelled out or offering a system of beliefs – they’ve gone from “I believe” to “Maybe” to “Who knows?” When pressed as to what they do hold to, they collectively answer, “Nothing in particular.”

Simply put, they are spiritual, but not religious.

They may not want to say, “I’m a Baptist,” but that does not equate with, “I don’t believe in God.” In other words, there is a strong reticence toward labels of any kind. It might help to visualize it in terms of a religious axis and a spiritual axis, creating four quadrants. 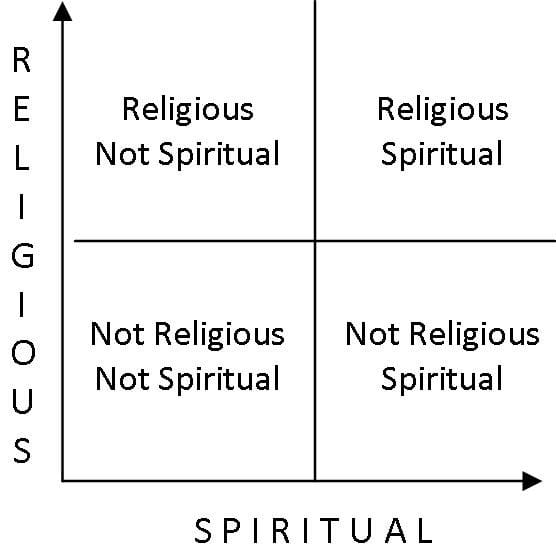 “Not Religious, Spiritual” is not a disavowal of faith or belief. Instead, it is the rejection of a label related to faith or belief. In years past, an unchurched individual might still claim to be Baptist or Catholic. Now there is great cultural freedom to drop the label entirely. The speed with which this has happened supports an old thesis of church historian Martin Marty, who wrote a book half a century ago on varieties of unbelief and who thought that religious cohesion “has long been overstated.”

John Green, a senior research adviser at Pew, breaks the religiously unaffiliated into three groups: first are those who were raised totally outside of organized religion; second are those who became unhappy with their religions and left; and, lastly, are those Americans who never really engaged with religion in the first place, even though they were raised in religious households. “In the past, we would describe those people as nominally affiliated. They might say, ‘I am Catholic; I am a Baptist,’ but they never went [to services]. Now, they feel a lot more comfortable just saying, ‘You know, I am really nothing.’”

So what of Generation Z? Or more particularly, their parents?

As Ruth Graham went on to write: “Somehow the gruel-thin texture of my adult faith has never troubled me. Or at least not until this summer, when my infant daughter careened into my life—including my spiritual life, such as it is.” She reflected that she wanted her child to know certain religious stories and songs, almost out of nostalgia for her own childhood, but “I don’t want her to be afraid of a hell I don’t believe in, and I don’t want to lie about what I believe.” She ends by saying: “I dread the day when my daughter asks me if the stories in the Bible are true. My real answer is that some of them are and some of them sort of are and some of them aren’t.... That should work for a 3-year-old, right?”

But it’s what we have to work with.

Next: Don't Worry About Inviting Me to Church