One of the most important disciplines as a leader is to look the facts in the eye.  To own the reality of your situation.

Even when it bites.

The reality of American culture is simple: religion is in steep decline.

Consider the “rise of the nones,” those who claim to have no religious identity whatsoever.  The number of “nones” in the 1930’s and 1940’s hovered around 5 percent.  By 1990, that number had only risen to 8 percent, a mere 3% rise in over half-a-century.  Between 1990 and 2008 – just 18 years – the number of “nones” leaped from 8.1 percent to 15 percent.  Then, in just four short years, it climbed to 20 percent, representing one of every five Americans.  If you isolate Millennials, it climbs to one out of every three.

Or consider the graphs assembled by Tobin Grant, based largely on the work of the Gallup organization, such as the decline in church attendance: 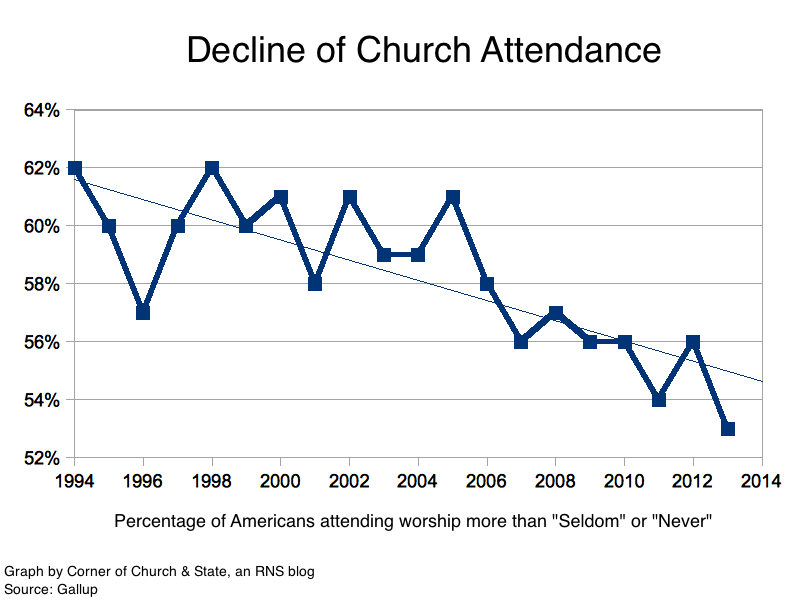 The same is true of church membership, religion’s importance in life, and religion’s relevance to today.

Combining all such graphs into one, Tobin offers the following graph, titled “The Great Decline”: 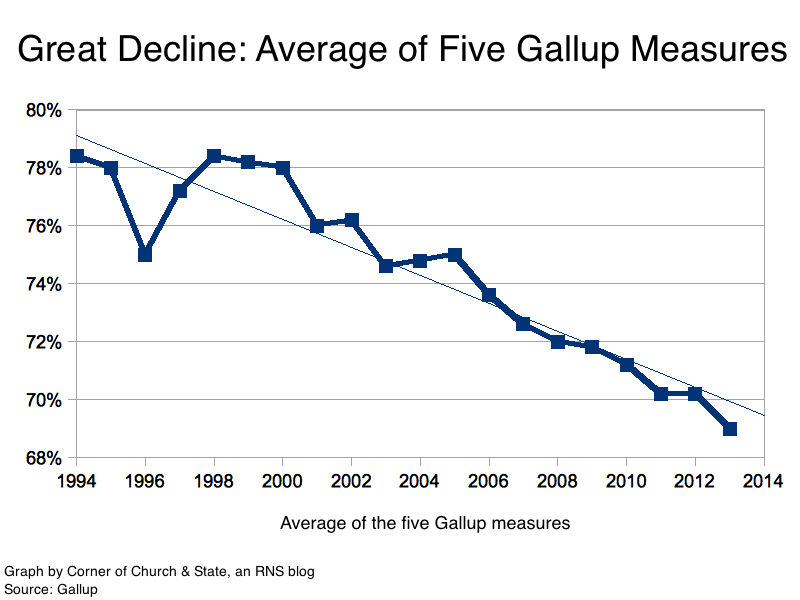 One would think that such reports would galvanize the church into heightened mission mode, spurring on the rethinking of strategies with a fresh awareness that North America is now prime mission territory.

And in some quarters, it has.

But I have been stunned by the number of people who seem more interested in dismissing such reports.  Some say it’s just fear-mongering, contending that such reports of the “death” of the church are premature.

No doubt this is true.

But I am more concerned with those who dismiss such reports theologically, saying that all those leaving the church are simply the “unregenerate” who have lapsed in line with the pseudo-reality of their faith.

As if that makes it okay.

But it’s not okay.

Yes, I believe in the old mantra “once saved, always saved,” but that seems to me to be missing the point.  First, let’s make sure that we understand the phrase itself.  Biblically, the emphasis isn’t on the “once” part, but the “saved” part.  Once someone is truly saved, they are eternally secure.  But the final verdict on that isn’t in until this life is over.

But more to the point of this blog, think about what that phrase is saying missiologically.  We may not be losing authentic followers of Christ, but if we are indeed losing people to the church and “religion” who were never saved to begin with, isn’t that a concern?  If people who need Christ are walking away from the church and their sense of “faith,” isn’t that losing a primary evangelistic audience in a day and time when we can ill afford to lose even a single listening ear?

There is something else at play here that must not be denied.  We live in a post-Christian culture, which means the supportive nature of a Christian culture – in whatever form it may have existed – is no longer in place.  If people are removing themselves from the only place left that is contending for the faith, that’s a concern.

Actually, it’s a crisis.  One that leaders dare not deny.  Instead, they must embrace it and go into full mission-mode.

James Emery White, The Rise of the Nones: Understanding and Reaching the Religiously Unaffiliated (Baker).

James Emery White is the founding and senior pastor of Mecklenburg Community Church in Charlotte, NC, and the ranked adjunctive professor of theology and culture at Gordon-Conwell Theological Seminary, which he also served as their fourth president. His latest book, The Rise of the Nones: Understanding and Reaching the Religiously Unaffiliated, is now available on Amazon. To enjoy a free subscription to the Church and Culture blog, visit www.churchandculture.org, where you can view past blogs in our archive and read the latest church and culture news from around the world. Follow Dr. White on twitter @JamesEmeryWhite.