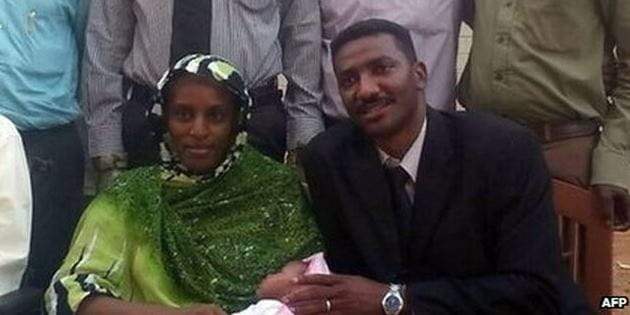 After receiving overwhelming condemnation from nations and human rights organizations around the world, Sudan reversed its death sentence against 27-year-old Christian woman, Meriam Yehya Ibrahim. On death row for marrying a Christian man and allegedly turning her back on Islam, Ibrahim maintained allegiance to Christ during her imprisonment that began in February 2014. A few weeks ago while in prison, she gave birth to her baby girl (pictured).

Just earlier today, she was re-arrested by Sudanese forces who disagreed with the verdict reversal. At the airport in Khartoum, Ibrahim was with her husband, family, and lawyer. While just moments away from leaving for the United States, she was forcefully detained along with her US citizen husband, Daniel Wani. Ibrahim is apparently being held at the headquarters of a Sudanese security agency.

At the heart of this matter is the fundamental right of human beings to think freely and follow their own consciences in matters of belief. Ed Stetzer voiced the question well in his post:

"Why was this able to happen in the first place? Why was a Sudanese woman able to be jailed and sentenced to death for converting to a different faith, however it is legally described? Further, why does this happen so often?"

Stetzer answers his own question by explaining:

Most Muslim countries have not adopted the United Nations' Universal Declaration of Human Rights... This is where we must demand change if we care about human flourishing and freedom. Article 18 would protect Meriam Ibrahim and so many other vulnerable people converting from one religion to another:

Article 18
Everyone has the right to freedom of thought, conscience and religion; this right includes freedom to change his religion or belief, and freedom, either alone or in community with others and in public or private, to manifest his religion or belief in teaching, practice, worship and observance.

The freedom to change one's religion matters, and I'm glad the world spoke up about Ibrahim. Now the world needs to speak up about the right to convert. In a multi-faith world, we recognize that we are not worshiping the same God, gods, or goals, and we must not be offended by our desire to proselytize one another (for Christians, that means evangelize, a distinctively Christian word).

Years ago, John Piper wrote that "pluralism is not [God's] ultimate ideal, but in a fallen world, coercion will not produce the kingdom of God." In other words, yes, every knee will bow to Christ ultimately (Philippians 2:10), but that will only happen after Christ Himself returns and ushers in His final Kingdom.

Related to this, I have argued elsewhere:

"Coercive human government (whether Christian or otherwise) is undesirable in the Christian view. An informed biblical worldview actually supports pluralism, democracy, and freedom. Christians ought not tolerate coercive secularization of the government. Neither should they aim to establish a theocracy. Anyone who presents those two as the only options presents a false dichotomy."

More clearly, Christianity calls for persuasion, not lock-step conformity brought about by force. Certainly, you can ignore the Bible and be just as wrong as you want to be during your life on earth. Christianity recognizes this freedom. Scripture simply warns that every human being will stand before God and bear the consequences for his own actions and beliefs.

Religious liberty is consistent with Christian teaching and values. But whether Sudan and the repressive Muslim world join us on the moral high ground remains to be seen. Meanwhile, Christians everywhere are kneeling in solidarity to pray for Miriam, her husband, and children.

Next: How Can I be Happy?