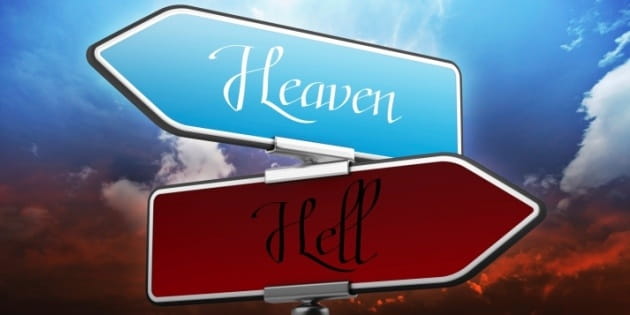 Heaven is big at the box office. Hell, not so much.

In a thought-provoking USA Today column, Kirsten Powers wonders aloud why we seem to hear so much about eternal bliss but not eternal judgment. Sony's faith-based drama starring Greg Kinnear “Heaven Is for Real” took in $22.5 million over Easter weekend. Contrasting this, Powers observes: “Books about euphoric visits to heaven rocket up the best-seller list, while those recounting bone-chilling sojourns to Hades languish. You might be surprised to learn they even exist.”

In her article, Kirsten Powers cited a 2009 survey in which 74% of Americans said heaven is real, while only 59% believe the same of hell. She then asserts,

“But the Bible is quite clear. According to evangelical pastor Tim Keller, ‘Jesus taught about (hell) more than all other biblical authors put together.’ To cling to the idea of heaven and then ignore hell is curious.”

Powers is also skeptical of near-death experiences, not unlike many evangelical Christians. Nancy Guthrie, for one, recently said stories like Heaven Is for Real are unhelpful and actually serve to diminish biblical faith rather than encourage it. No one is obligated to believe them. Guthrie’s article We Don't Have to Read the Book or See the Movie to Know Heaven Is Real asserts that such stories elevate claims of supernatural experience over the substance of the Scriptures. She points out: “Jesus himself spoke [in Luke 16:19-31] of the uselessness of such testimony for generating genuine faith.”

Randy Alcorn, who authored the book Heaven (Tyndale, 2004), expressed some reservations about Heaven Is for Real in a post that appeared here in May 2011, but also added:

“I certainly don’t see a false gospel in the Burpo’s account of Heaven. I rejoice that Jesus is portrayed as the only way to God, in keeping with John 14:6and Acts 4:12. I could have wished for a greater emphasis on confession of sin and repentance, but on major biblical issues I don’t think [the book] contradicts Scripture. Yet on some details… I’m just… uncomfortable. I emphatically agree with the title: Heaven is for Real. Not because Colton Burpo [says he has] been there, but because the Bible says so.”

Your turn. What do you think about the movie “Heaven Is for Real?” Why do you think more people believe in heaven than in hell?

Next: Repentance Is a Crowd-Killer